My staycation, a.k.a. quarantine, continues. I do less of what I should do – clean the house for instance – and more of what I like to do, such as read, participate in Zoom get-togethers, and indulge a bit of nostalgia. Burrowing through my closet, I discovered a T-shirt that conjured up memories of two trips taken fifty years apart. 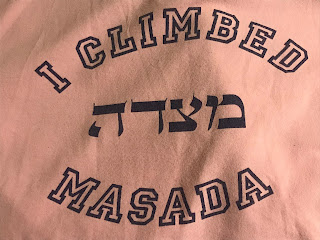 Summer 1967. The world explodes, or so it seems. Race riots break out around the country. The Vietnam War heats up and anti-war demonstrations take off. Israel’s Six Day War begins and ends. I turn 17 and travel to Israel.

In 1905 my grandmother’s family left Hungary and settled in the United States. Relatives that remained in Hungary emigrated to Palestine in the 1930s. Grandma Rose kept in contact with her Israeli relations, and in 1967 sent me to Israel to meet them. I began a six-week adventure with people I did not know in a country never visited whose residents spoke a language I did not understand.

Hours after leaving New York I stepped onto the tarmac in Israel, dazed by the bright sun, the heat, and travel exhaustion. Uncle Alex met me at the airport. We stopped along the road at a falafel stand – my first taste of Mid-Eastern cuisine, warm chickpea falafel balls embedded in a pita with lettuce, tomato, onions and a spicy sauce that oozed everywhere. I was hooked. My journey ended on a Jerusalem street in front of a 1920s-era stone home reputed to lodge prisoners in the cellar during Israel’s War of Independence. I met Aunt Vera (Vera and Alex were brother and sister) and cousins Naomi and Ami, my guides during my visit.

The three of us wandered alleys in the Old City packed with stalls selling souvenirs and religious items – Jewish, Christian and Muslim, and passed makeshift memorials to soldiers killed during the battle for the city a few weeks earlier. Occasionally shots rang out, startling me. Ami shrugged his shoulders, “happens all the time.”

We visited the Bahai Temple in the north and viewed underwater life in the Red Sea from a glass bottom boat in the south. We splashed in the waters of the Mediterranean Sea and the Jordan River. We fooled around on stage at the Caesarea amphitheater and climbed stone seats, imagining Roman actors performing before a raucous crowd. I got used to rough toilet paper and no TV.

I board another plane for home. A layover in Canada delayed the flight. Meanwhile my parents and boyfriend drove to Kennedy, unaware of the delay until they reached the airport. On a normal day they would have settled at a restaurant and dawdled over dinner.

That evening the final episode of the TV show The Fugitive aired at 10:00 PM Eastern time. It was a momentous event and my parents and boyfriend were determined not to miss it. If my plane landed on schedule we would have arrived home in time to watch the show.

That did not happen.

The three would-be viewers searched the airport for a TV, but their quest proved futile. They were not among the 78 million Americans who watched The Fugitive finale – 72% of American homes tuned in - the largest TV audience for a program up to that time.

I expected smiles and cries of joy when I disembarked. Instead three frustrated, despondent individuals grabbed me and my bags and dragged me out of the airport, fuming over their failure to witness The Judgment Part II,  “the day the running stopped.”

I was responsible for the fact that they missed the greatest TV show ever.

They never totally forgave me. 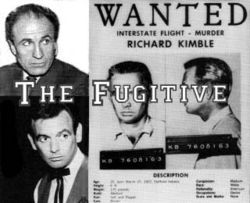 Summer 2017. The President of the United States dominates the news, fake and not-so-fake. North Korea fires ballistic missiles. Terrorist attacks occur around the world. I return to Israel. I had not kept in contact with my Israeli cousins, and tried to reconnect with Ami and Naomi, but failed. 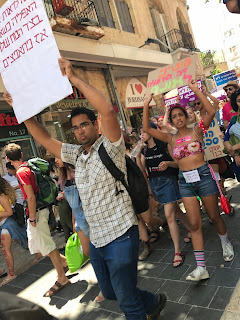 Sixteen family members traveled to Israel. We arrived at our hotel on a Friday, dropped our bags and went out to explore, eventually settling at an outdoor table at a cafe on Ben Yehuda Street, a major pedestrian mall. Suddenly we hear loud voices and shouting. Gazing up the street, a wall of women and a few men march towards us waving signs in Hebrew and English demanding women’s rights.

We visited the Western Wall, the remains of the Second Temple destroyed by the Romans in 70 AD. Men and women, separated by a fence, daven (pray), and place pieces of paper with prayers on them in crevices in the wall. Groups of Orthodox men dance in a circle, welcoming Shabbat. The first time I visited the Wall, also on the Sabbath, Ami scolded me for carrying money on the holiday.

Our entourage trekked the narrow streets and alleys of Jerusalem, up and down steep hills. I don’t remember the terrain as an obstacle fifty years earlier. We waded through tunnels beneath the streets of Jerusalem that supplied water to allay the thirst of besieged residents over 2,500 years ago. We tubed down the shriveling Jordan River, a victim of climate change and poor water management. We plunged into the Dead Sea, floated on its salty waters, and covered ourselves with mud. The lake was not threatened by receding shorelines and sinkholes my first visit. I watched my grandkids run around the ruins of a Roman amphitheater and race up and down the age-old stone bleachers.

I climbed Masada. Younger members of my party completed the hike in an hour. I finally arrived at the top in 1½ hours, but stopped along the way to take pictures (and catch my breath!). I proudly wear my “I Climbed Masada” T-shirt!

We viewed barbed wire fences separating Palestinian lands from Israeli settlements, walked through bunkers along the Gaza border, bounced across grassy Galilee hills in a jeep, and rode camels in the desert.

We arrived in Tel Aviv the last day of Tel Aviv Gay Pride Week. From women’s rights to gay rights, from the ancient holy city of Jerusalem to the cosmopolitan metropolis of Tel Aviv, we traversed thousands of years across land that has been a crossroads of civilization since prehistoric times.