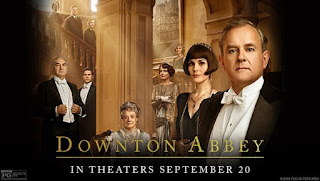 The hype worked for me. Six seasons of episodes immersed in an upper crust, extravagant lifestyle, exhibits of Downton Abbey clothes, dinnerware, table settings and other items, Facebook posts, TV commercials – all whet my appetite for THE movie.

I bought tickets online the day before the movie opened. Seniors that we are, hub and I chose a late afternoon time slot. We arrived a few minutes early, splurged on a bag of popcorn and entered the theater (one of seven screens). Of course the movie did not start at 4:20; previews began at that time. We settled into oversized plush seats, anticipating an enjoyable two hours captivated by another world.

I didn’t mind the previews; they passed quickly as I munched away. Finally, after an 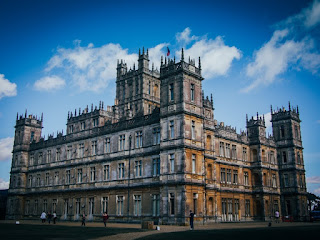 opening scene in which viewers don’t know what is going on until later in the movie, the pristine English countryside appears onscreen. As the camera moves out to reveal a grander view, our eyes settle on Downton Abbey, an English almost-castle. We become engrossed in the lifestyle of lords and ladies as well as a peak into the life of commoners.

The year is 1927. Life is good, but even aristocrats have a challenging time making ends meet. Numerous servants to pay, clothes to buy (how many outfits are needed when you dress for dinner every night?), food to purchase, a castle to maintain...

And the king and queen invite themselves over for a night.

Folks not familiar with the show need a cheat sheet of the characters and a review of the events of season six if they hope to figure out what is going on. Wikipedia is a great resource for a list of the entire cast throughout the show’s six seasons.

What struck me as interesting, and rather sad, is that many of the issues confronting the characters and the country remain problems today – England and Ireland, homosexuality, the role of women in society.

The usual cast members show up. Some look older (Lady Grantham and Mr. Carson), some better than ever (Tom Branson). Everyday dilemmas of the characters interweave with preparations for the king and queen’s visit. To add to character confusion new ones are introduced, and I bet a couple will appear in future movies/TV miniseries/comic books/videogames, when and wherever the saga continues.

There are light-hearted moments and banter, exquisite outfits, pageantry, a little intrigue. Downton Abbey fans will appreciate the film, others not so much. A couple of story lines seem to set the stage for a sequel. Or two or three. I can’t wait...
Posted by Meryl Baer at 9/20/2019 10:49:00 PM