Binge watching has become all the rage. Why wait week after week for another episode of a favorite show? Why wait anxiously through a seasonal hiatus and begin watching again when you have a 21st century alternative – binge watch the entire series, whether a 3-episode miniseries or a show with a 20-year longevity.

A lot of TV viewing.

Too much squandered time, I admit. But the show is addictive.

The setting is a somewhat affluent fictional county of small villages, farms, and country 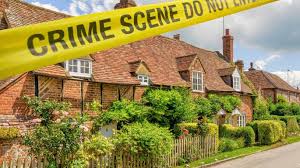 manors. The manors are not as large as the grandiose Downton Abbey, but impressive nonetheless. Smaller dwellings also appear, characterized by low ceilings and doorways and tended flower gardens, crammed with the stuff of British middle-class life. Run-down shacks in the woods house folks of dubious backgrounds.

A pub or two play a part in most episodes, venues with dark wood paneling and a bar counter where detectives search for strangers and chat with tavern owners and barmaids. Village folks occupy cozy alcoves and guzzle alcoholic beverages, consume hearty meals, and gossip. A village church and its vicar recur...also the police station...and scenic narrow country roads, settings for car crashes, hit and runs, and mad dashes to prevent another murder. There is rarely only one homicide per episode.

Ten reasons I got hooked on the British detective series Midsomer Murders:

1.   I like detective shows, everything from Perry Mason, Murder She Wrote, Columbo and Castle to Elementary.
2.   Great scenery. Villages look unscarred by 20th and 21st century development – no chain stores or supermarkets, little traffic, pristine landscapes. Family-owned businesses proliferate, although financial troubles surface, a common theme.
3.   The actors look like real people. Apparently British TV does not feel the need to make every actor/actress handsome/pretty.
4.   Interesting story lines and no annoying commercial breaks.
5.   The culprit is not obvious, but can be deduced.
6.   I am learning a little British lingo, and closed captions (British accents can be difficult to understand) ensure none of the dialogue or background sounds - music, doors creaking, footsteps - are missed.
7.  Lead actors are appealing.
8.   Don’t need to watch in sequence; each episode can stand alone.
9.   Amusing dialogue and dark humor lighten the drama.
10.Characters mirror real life - everybody has secrets, some relevant to the case and others irrelevant.

Midsomer is an idyllic (except for the murders) semi-rural region. I wonder what will happen when the writers kill off everyone living, working, and visiting the various Midsomer villages.

How many more years can Midsomer Murders endure?