An Island On My Mind 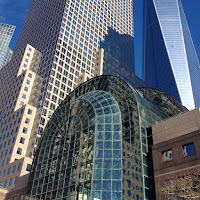 I go to Paris, I go to London, I go to Rome, and I always say, "There's no place like New York. It's the most exciting city in the world now. That's the way it is. That's it."
- Robert De Niro

The history major in me surfaces at times. Names, dates, events conjure memories of hours passed steeped in stories of kings, queens, princes and their murderous end, medieval-era wars, influential artists and scientists, explorers and business titans. Most of the information gathered for essays and exams was soon forgotten, but some of the trivia facts linger.

Picture this:
A group of Indians, dressed for the warm spring weather in light-weight leather and furs, sit in a semi-circle under a large tree which serves as a meeting place for important tribal assemblies. Across from the chief sit three or four Dutchmen dressed in breeches and long-sleeved shirts and coats, appropriate for the cooler Northern European weather from whence they came, but too warm for the temperate weather prevailing in the mid-Atlantic area of the New World. Indians had been harassing the colonists recently settled on the southern tip of the island. The Dutch West India Company was eager to buy the land, end the troubles and secure the land. The Indians roamed the island and beyond, immense territories available for hunting, fishing, planting vegetables, taking hikes with the kids...So what did the loss of a few acres of forestland matter?

The Indians sold the land to the settlers; actually, the Dutch West India Company. A Company internal memo at the time summarizes the transaction:

Yesterday the ship the Arms of Amsterdam arrived here. It sailed from New Netherland out of the River Mauritius on the 23rdof September. They report that our people are in good spirit and live in peace. The women also have borne some children there. They have purchased the Island of Manhattes from the savages for the value of 60 guilders. It is 11,000 morgens in size (about 22,000 acres).

Which Indian tribe sold Manhattan? The identity of the tribe remains clouded in history, but probably an Algonquin group. One story says the Indians who sold the land didn’t own it--a reason they accepted the budget price. Or maybe the Indians believed they were renting the land, or offering only trading and fishing rights...no one knows for sure.

Who knew what that forested island would morph into centuries later?
I regret profoundly that I was not an American and not born in Greenwich Village. It might be dying, and there might be a lot of dirt in the air you breathe, but this is where it’s happening.
-                - John Lennon

I learned in school the price of the trade was equivalent to $24, but recently scholars dispute that and came up with a cost of $951.08 (no idea how they can be so precise). I was also taught Peter Minuet traded the Indians beads for the land, but there is no written account verifying that. Again, scholars question the accuracy of the tale, suggesting the Dutch probably traded food, coins, or other goods. The purchase of Staten Island in 1670 involved a trade of clothing, food, cooking utensils, muskets, and other items.

What is beyond question is that Europeans settled Manhattan and surrounding areas, eventually creating one of the most populous cities on earth--an immigrant gateway, financial and commercial center, tourist destination, culinary and cultural hotbed.

There is no place like it, no place with an atom of its glory, pride, and exultancy. It lays its hand upon a man’s bowels; he grows drunk with ecstasy; he grows young and full of glory, he feels that he can never die.
-               -  Walt Whitman
Billy Joel (and Tony Bennett) in a New York State of Mind

I look out the window and I see the lights and the skyline and the people on the street rushing around looking for action, love, and the world's greatest chocolate chip cookie, and my heart does a little dance.
– Nora Ephron, Heartburn 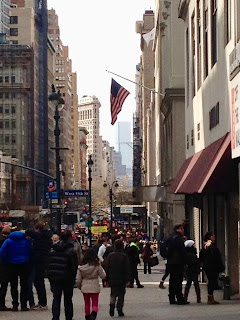