South America’s Natural Wonders at the End of the World

Argentina is far from my home. Not weeks or months distant, the time taken before the advent of air travel, but only hours away. Yet to my body the flight and its aftereffects lingered. Difficulty standing straight, strained neck, cramped feet, hungry stomach (food served aloft inedible) – welcome to economy air travel 21st century style.

But the discomfort was worth it, a prelude to three days in Buenos Aires followed by a two-week cruise and three days in Santiago, Chile. Summer in the southern hemisphere, we donned lightweight clothes most of the time, tossing on warmer garments when cruising around the tip of South America, around Cape Horn and through endthe Straits of Magellan. Only 600 miles from Antarctica, the temperature hovered in the 40s but the wind could blow you away!

Along with 2,500 other passengers from around the world – I met folks from England, Sweden, Germany, Canada, Russia, Australia, Argentina and Chile - we experienced the natural wonders of this part of the world. 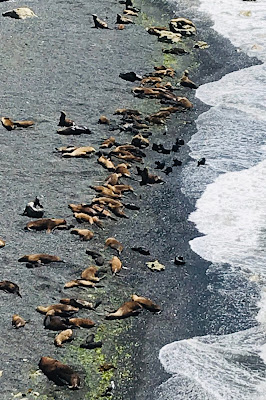 Sea lions sunbathing off the coast of the Atlantic Ocean,
Puerto Madryn, Argentina.
The small black ones are sea lion pups.
After a few months their skin color changes. 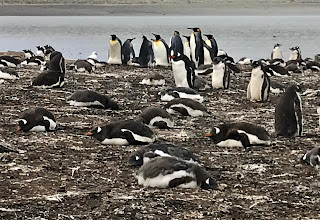 Penguins in the Falkland Islands. 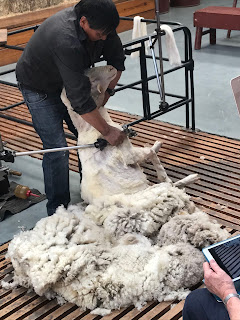 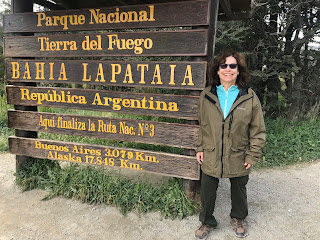 The End of the World, Argentina 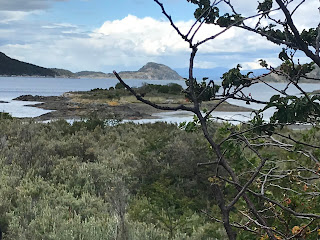 Looking south, the End of the World, Argentina. 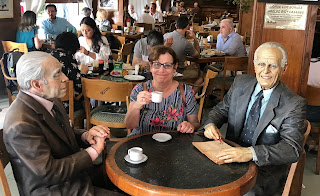 And finally, penguins on the go...