Veering Off the Beaten Path 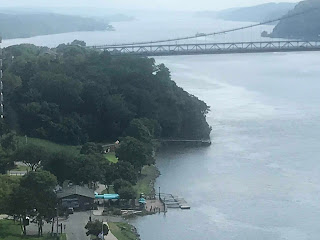 Nestled along the Hudson River a series of picturesque towns, grand homes and mansions stretch the length of the waterway from New York City to Albany. Ever since Henry Hudson sailed the river in 1609 – and probably for eons earlier - the river has been a transportation network as well as a recreational paradise. Hudson encountered native Americans, some not so friendly, and abundant wildlife.

Artists reveled in the river and surrounding terrain – the Catskill mountains, unspoiled forests, modest farms and villages. The Hudson River School of Art flourished in the mid-1800s – Frederic Church and Thomas Cole among the most famous. The artists won renown for their work and established the first home-grown American art movement.

In the mid-1800s James Roosevelt, a prosperous New York merchant, purchased a large home for his family in Hyde Park, on the east side of the Hudson River about 90 miles north of New York City. He and his second wife Sara Delano raised their son in this aristocratic country setting. Franklin Delano Roosevelt grew up to be the 32nd President of the United States, the only four-term elected President, and guided the country through the Great Depression and World War II.
Hub and I travel along highways from New Jersey to Vermont regularly, visiting family. We often say – why don’t we stop and see Roosevelt’s Hyde Park…or the Vanderbilt Mansion…or make reservations for an amazing meal at the Culinary Institute…or walk along the Walkway over the Hudson? But we keep driving…

Until this week. Returning from a two-week babysitting stint, we were in the mood for a change of pace, a transition from concentrated toddler time.

In 90-degree heat we ventured onto the Walkway, a rebuilt railroad bridge, and peered at the boats cruising the river. The view is not quite as pristine as that viewed by Henry Hudson and the Hudson School of Art painters, but glorious nevertheless. Rolling Catskill mountains and dense forests – a portion a legacy of Roosevelt’s conservation endeavors – contrast with the buildings and on-going construction of the city of Poughkeepsie.
Unfortunately the past haunts the river. Pollution from a number of sources – most notably PCBs discharged into the river by General Electric – caused pollution issues not totally fixed. GE halted the discharges in 1977 and river clean-up is on-going, but concentrations of the chemical impact the survival of fish, birds and mammals inhabiting the river today.

The following day we arrived at Roosevelt’s home at 9:00 a.m., eager to tour the house and avoid crowds. The residence offers a peek into FDR’s remarkable life. The home remains decorated and furnished exactly as it was on April 12, 1945, the day of FDR’s death.

FDR did not die at home – he was in Warm Springs, Ga., but is buried on his beloved estate.

We toured the house and strolled through the museum. Three hours later, hungry and tending sore feet, we headed home, vowing to veer off the beaten path another time to visit additional Hudson Valley sites.
Posted by Meryl Baer at 9/01/2018 01:33:00 PM