Hub and I spent the past week grandsitting our 2½-year-old granddaughter. And our work is not yet over, not until late Tuesday night (almost Wednesday morn), assuming the tot’s parents and sister arrive home on time. We will be packed and ready to drive home. Should parents not show up, the kid may have to drive herself to the library for Storytime and clean her own butt (only after pooping. She has mastered the pee wipe).

But I wander from what I wanted to comment on.

I barely kept up this week with the news while engaged in kid stuff. Nothing changes…but one item did get my attention. And, as the title of this post indicates, it is all because of PETA – People for the Ethical Treatment of Animals.

I bet most of us recognize – and perhaps still indulge in – the varied-shaped animal crackers packed in a small, colorful rectangular box. The package featured animals – jungle animals – behind bars, caged. Not an issue over a century ago (116 years to be exact – 1902) when the Nabisco product premiered, but a problem in the 21st  century. Nabisco merged with Standard Brands years ago, that company merged with R.J. Reynolds, that company merged… etc. etc…and today Nabisco’s iconic brands are owned by Mondelez International. Want more information about the history of animal crackers, including the infamous Barnum’s? Click here.

PETA wrote a protest letter to Mondelez in 2016, a rallying cry against caging animals. The campaign fighting cruelty to animals (including artistic images of real ones) resulted in a new box design – wild animals uncaged, roaming free. PETA set them free! 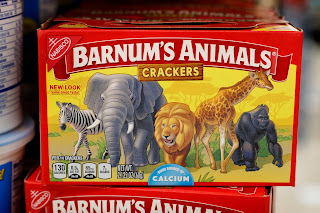 I am too tired to consider the moral of this tale, but I think it has something to do with concerned folk making an impact. Or maybe the message is that the trials and triumphs of everyday life, small as they might be, endure while much of the media today is consumed by politics and political intrigue.

I am nostalgic for the days when a tweet was nothing more than the sound of a bird.