Notes from the Last Frontier

Travel usually comes with an occasional headache or two or three, glitches large and small. Have you ever travelled for any length of time without issues?

Until our Alaska trip.

A few highlights of our almost-glitchless trip… 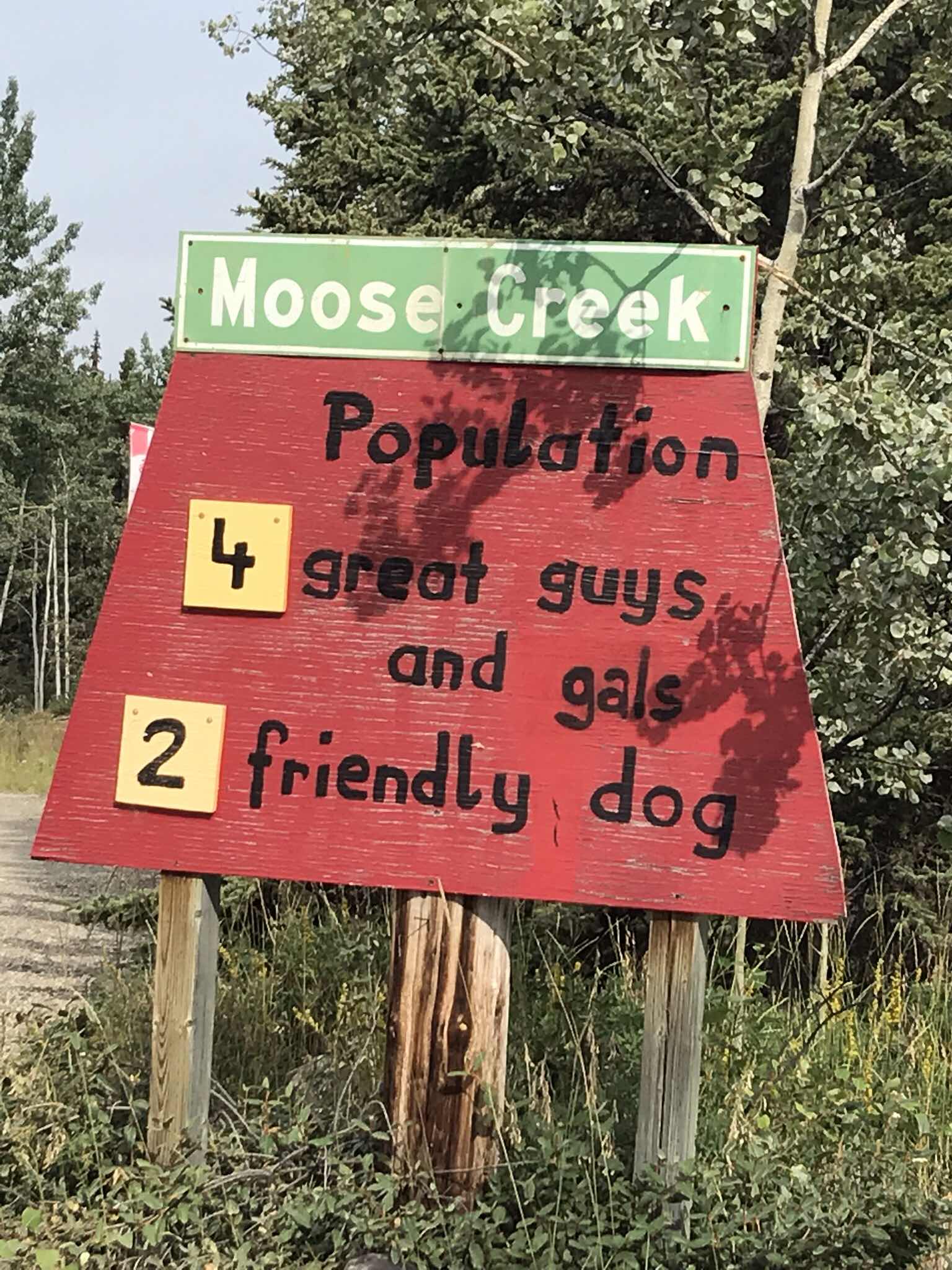 One of the stops on our trek through the Yukon.

An envelope with room keys and the next day’s agenda appeared magically. No phone calls to make, planning to do, luggage to lug.

We are being spoiled.

Our 28-member tour group enjoyed a one-hour chartered plane ride from Fairbanks, Alaska, to Dawson City, located in the middle of nowhere. Also known as Canada’s Yukon Territory. Check-in was seamless and quick, the plane departed on time and had comfortable seats, plenty of leg room, and cordial hostesses serving non-alcoholic beverages (no charge!).

The Dawson City airport comprises one landing strip. We walked off the plane and down a stairway onto the tarmac, then strode a few additional paces to stairs leading to a door which, upon opening, brought us face to face with Canadian customs agents. Passports drawn, the agent carefully perused Hayden’s.

“Do you have letters from his mother and father permitting him to travel with you?” The agent directed the inquiry to hub and me.

“We are not supposed to let minors into the country without proper authorization,” she paused and we held our breath, “next time bring letters with you,” and she handed me Hayden’s passport.

There is a good reason for the hard-packed but un-asphalted road surface. Under a thin layer of soil lies permafrost. The asphalt would absorb summer’s heat and eventually melt the permafrost, unsettle the ground and the foundations of buildings. Not a desirable scenario. 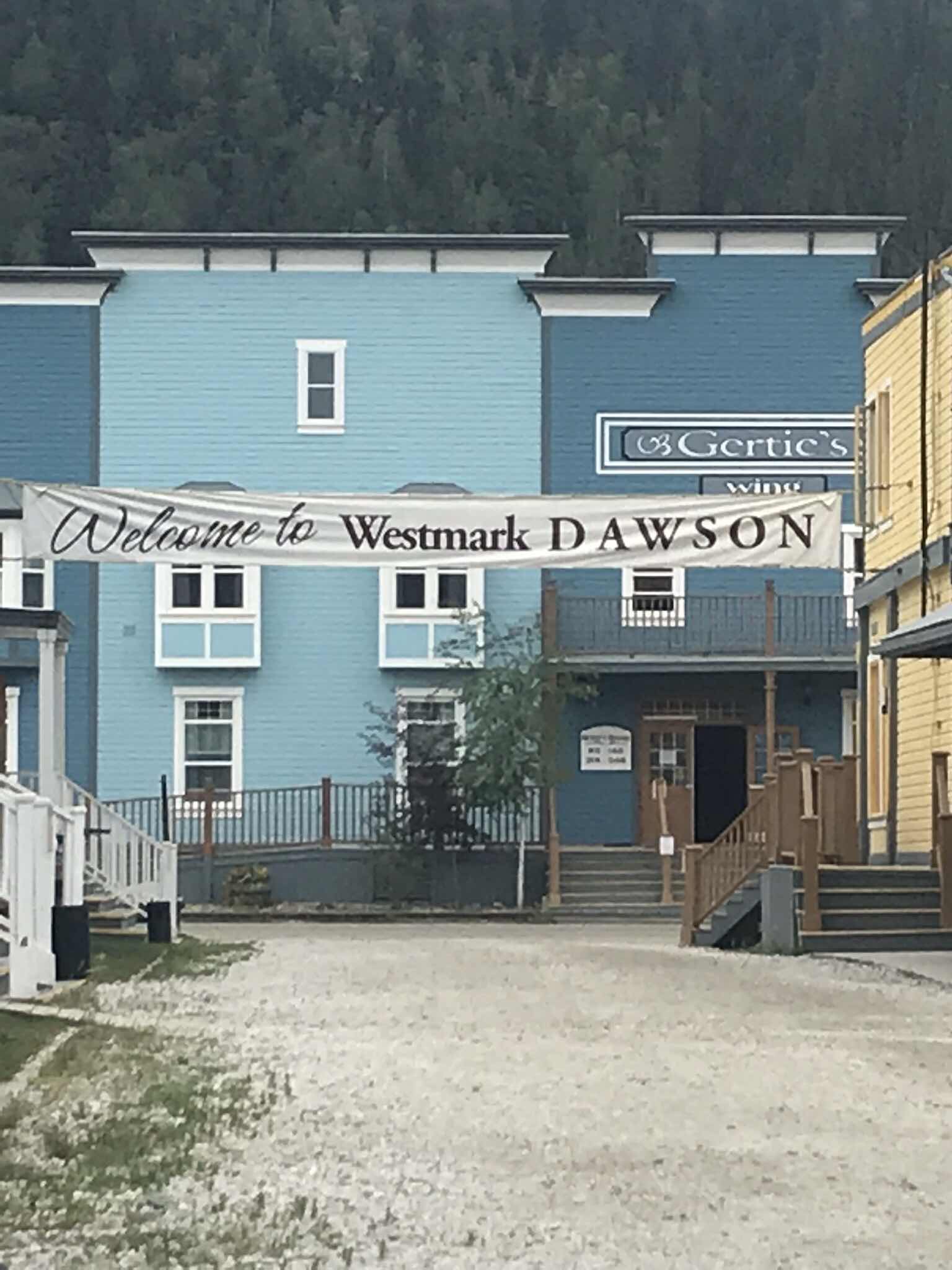 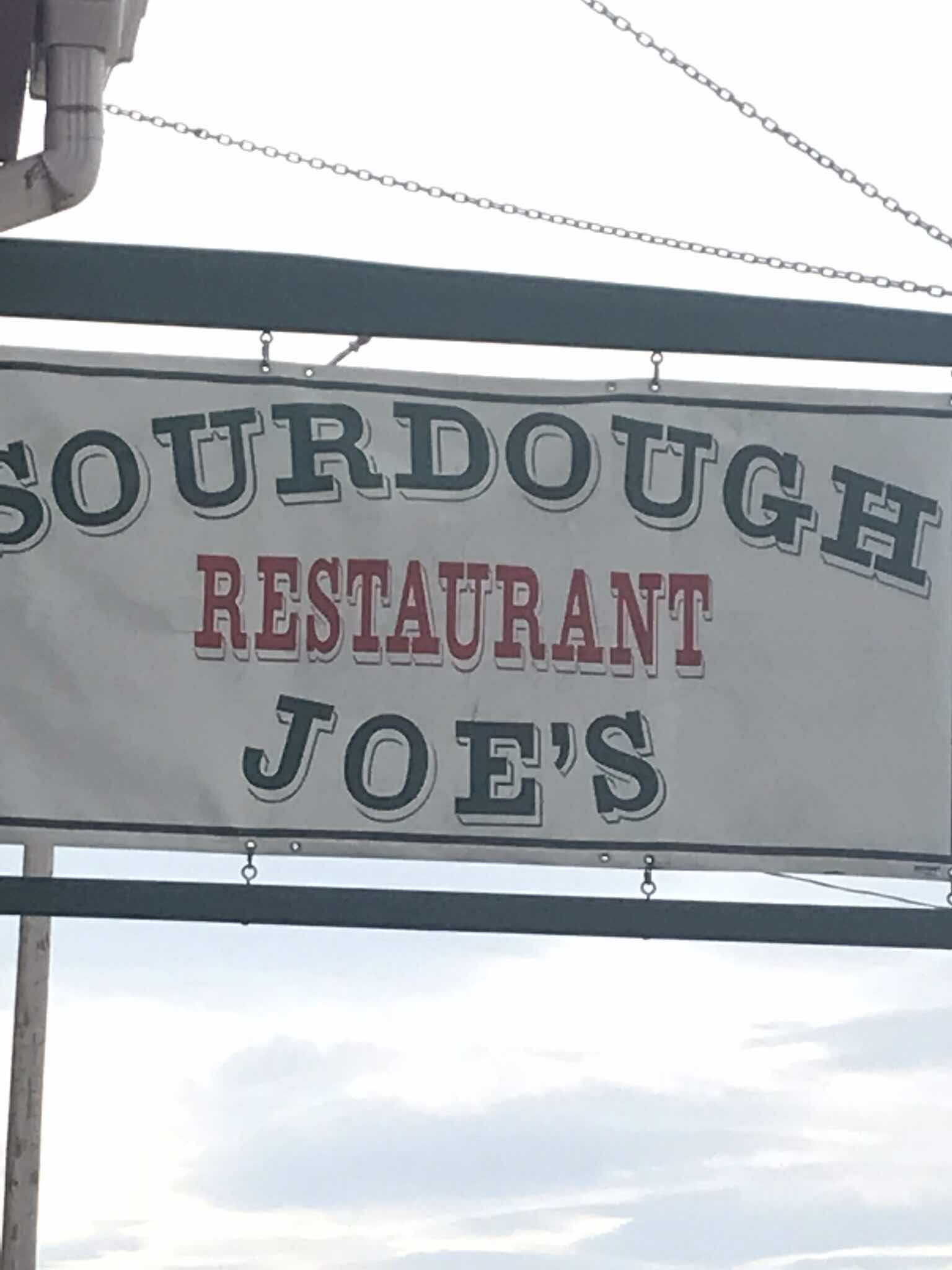 The weather throughout the trip was picture perfect - cloudless deep blue skies with temperatures hovering in the 70s, creeping into the 80s by late afternoon. Hours of daylight. We did not see a dark evening until the ship cruised south towards Vancouver.

We visited the site of the gold discovery that launched the 1898 Klondike Gold Rush. We panned for gold (twice). We visited the Moosehide gathering, a biennial event of First Nations featuring (free) food, arts and crafts (not free) and music (listening is free). The only way to access the place was via motorboat on the Yukon River. 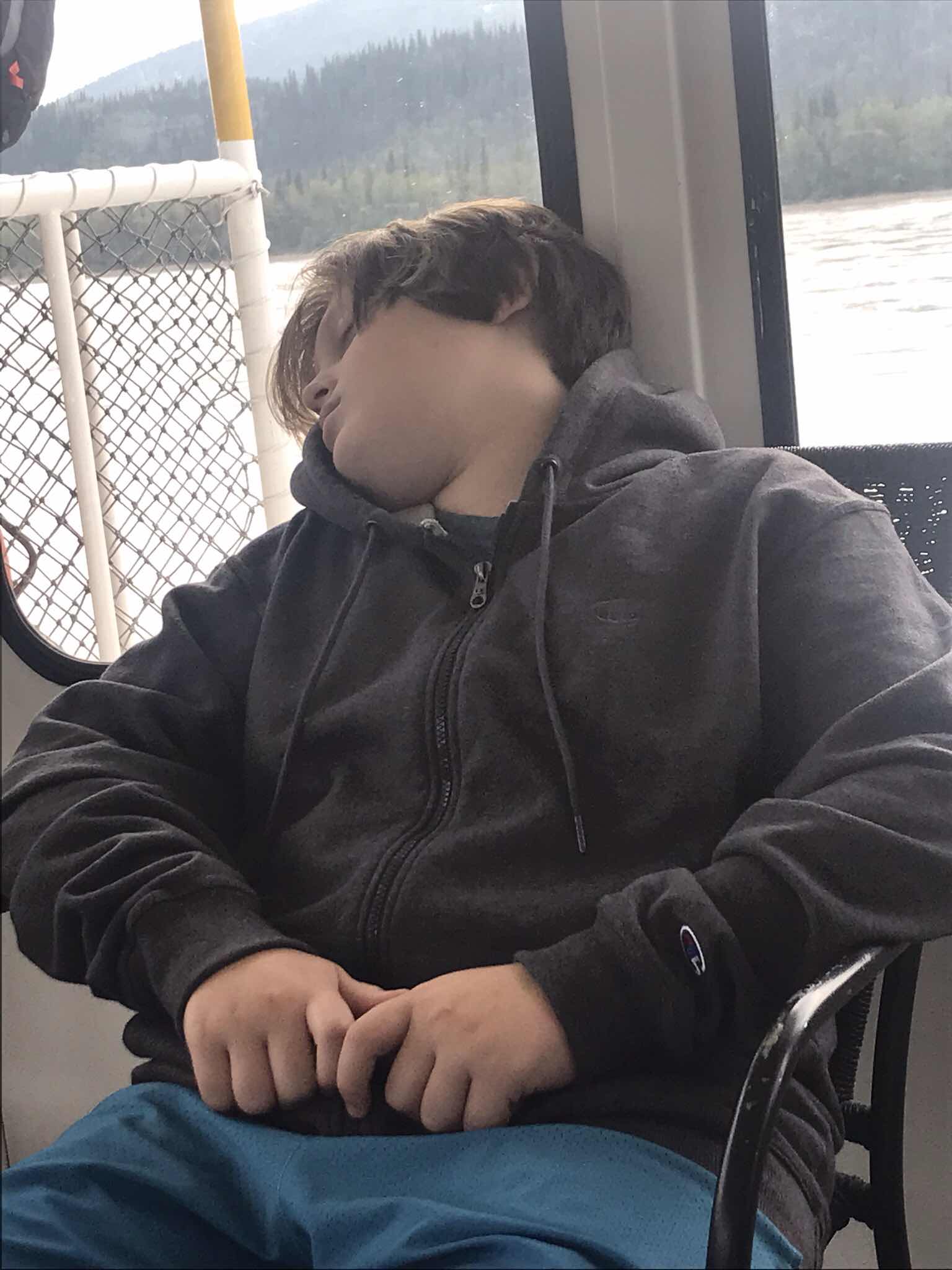 How we passed the time on long bus and train trips. 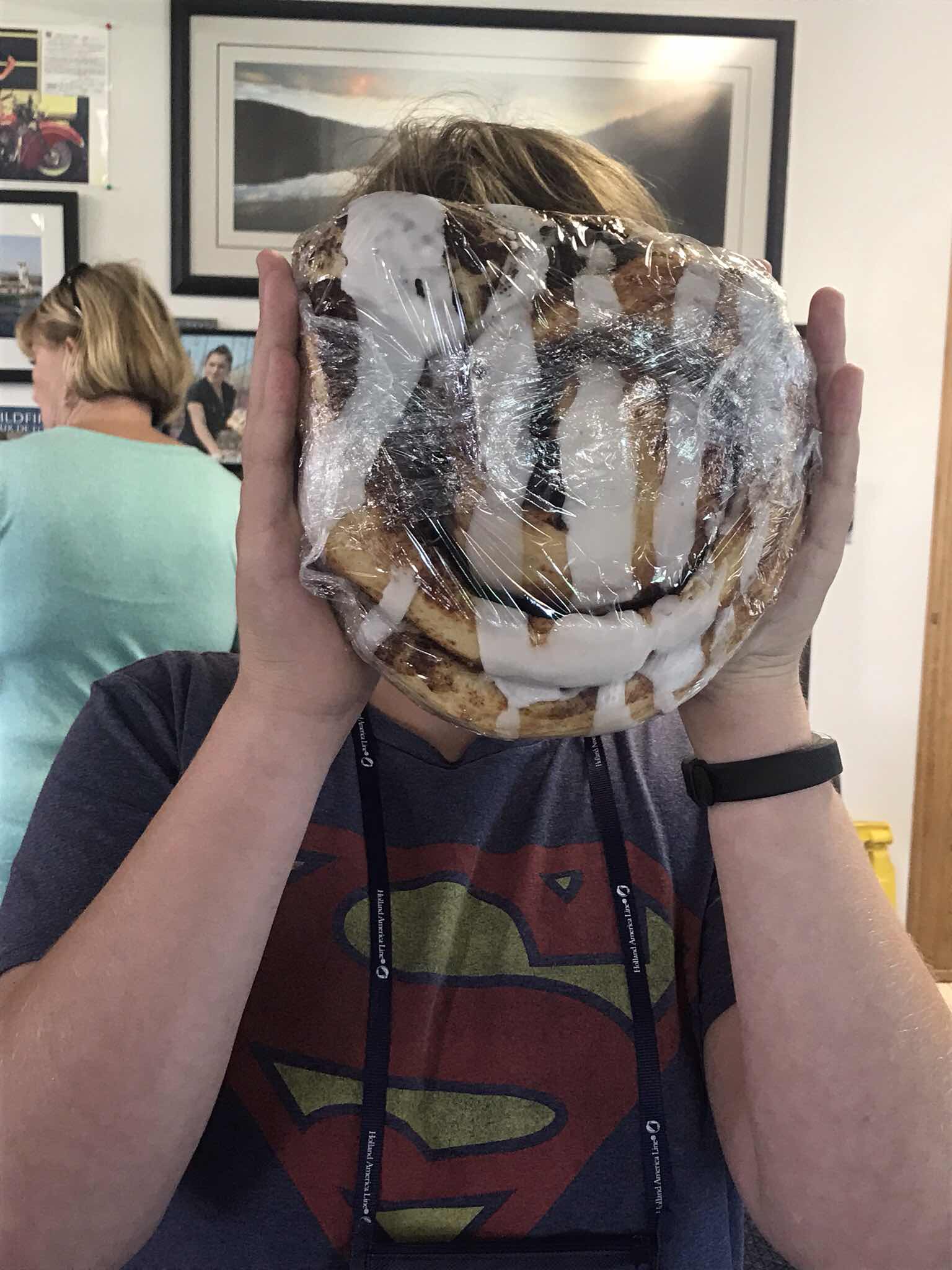 The other thing we did during long travel days - stop at scenic spots for picture taking
And country stores for a snack - like this giant-sized cinnamon bun.

We travelled via train, comfortable coach bus, plane, more comfy buses, the land portion of our trip ending with a spectacular narrow-gauge single track train ride from Fraser, Canada over and through mountains to Skagway, Alaska, where we boarded our ship, the MS Volendam.

The cruise is the relaxing part of the trip.

I don’t know how budget-minded, budget-oriented travelers that we are managed it, but we were upgraded to a suite, a word and type of room and travel alien up to this point in our Iives.

Opening the door to our stateroom…

The space was huge, especially compared to standard cruise ship cubicles. King-size bed and a couch that opened into a bed. A bathroom with jacuzzi tub. Dressing room with three closets (small but usable), sink, long counter, a wall of mirrors. Dressers with plenty of storage space. An espresso machine (fully loaded), fresh fruit bowl, plate of chocolates, a balcony (wrong word) - verandah - equipped with table, four chairs, two lounge chairs and an end table. And plenty of walking around space.

Hayden and I decided to play bingo one afternoon. Fill an entire card (called blackout) and the prize - a free 7-day cruise to the Caribbean or Mexico.

Hayden won. I signed the papers for my minor family member.

We look forward to our next (free!) cruise…