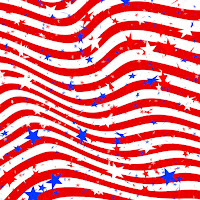 The Fourth of July is a uniquely American holiday, a celebration of the bravery, the boldness, the vision of our country’s founding leaders. Most were affluent yet dissatisfied with conditions defined by the King. Many did not realize their defiance would lead to a permanent shift from colony to independent country.

We celebrate the occasion with a day at favorite summer haunts – parks, beaches, campgrounds, our own back yards.

Hub and I attended a concert of patriotic songs and old favorites performed by the local symphony orchestra. Scanning the program I wondered about the origins of the songs’ writers and composers; at least one was an immigrant. Currently the Administration works hard to bestow negative traits on folks seeking to enter the country. My foreparents came ashore penniless yet succeeded in providing a life for themselves and their families that did not incorporate crime, drugs, or any of the litany of evils the President showers upon immigrants and people hoping to come here.

What wonderful music would we have missed if the following individuals – or their parents’ - were banned from the country?

The orchestra performed a medley from Aaron Copland’s 1942 ballet Rodeo. Copland’s parents emigrated from the Polish/Lithuanian regions of Russia. A bit of worthless trivia: the music was used as background in the 1990s Beef, It’s What for Dinner advertising campaign.

The U.S. Army Air Corps (now the Air Force) needed an official song but could not pay the commission for an original song. Budgets were tight in the Depression year 1938. Liberty Magazine stepped in and sponsored a contest for an official song. Composer Robert MacArthur Crawford – born in the Yukon, Canada – won.

Francesco Maria Scala, born in Naples, Italy around 1819, embarked on a naval career as a musician. However, prone to seasickness, he resigned. He joined the U.S. Marine Corps Band and eventually became the band’s director. Under his direction the band played what became the official marine song, commonly known as From the Halls of Montezuma.

The program ended with an audience sing-along of God Bless America, by Irving Berlin. Born in Russia in 1888, Berlin arrived in the U.S. at the age of five.

My folks came to the U.S. as immigrants, aliens, and became citizens.
I was born in Boston, a citizen, went to Hollywood and became an alien.
-      Leonard Nimoy
-
In America anyone can do or become anything!

There are today and always have been voices declaring the open door should be tightly shut. Sometimes the negative calls win. One example - the 1924 Immigration Act set quotas based on 1890s census data, effectively eliminating immigration from most areas of the world, except certain European countries.

Echoes of the past haunt us today, but we are a resilient nation. Calmer, more tolerant views will prevail. Eventually...

It is never too late to give up your prejudices.
-       Henry David Thoreau

I end with Neil Sedaka’s 1975 song The Immigrant, and a picture.

A lot of different flowers make a bouquet.— Muslim Origin
The Immigrant
Neil Sedaka
Harbours open their arms to the young searching foreigner
Come to live in the light of the beacon of liberty
Plains and open skies billboards would advertise
Was it anything like that when you arrived
Dream boats carried the future to the heart of America
People were waiting in line for a place by the river

There was a time when strangers were welcome here
Music would play they tell me the days were sweet and clear
It was a sweeter tune and there was so much room
That people could come from everywhere
Posted by Meryl Baer at 7/04/2018 10:10:00 PM