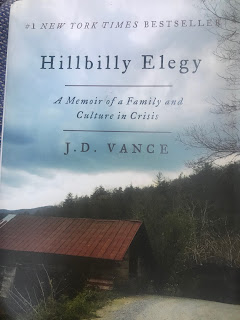 I have never been to Kentucky, but have ventured through West Virginia, southern Ohio and eastern Tennessee, all part of Appalachia, a region that stretches along the Appalachian Mountains from Alabama north to Pennsylvania. The people calling this expanse home are unflatteringly termed hillbillies, white trash, rednecks. (Remember the TV show The Beverly Hillbillies? The Clampetts strike oil on their land in the Ozarks and move to California. The Ozarks are not part of Appalachia but were settled by folks with the same Scotch/Irish/English ancestry as Appalachian settlers).

J.D. Vance, author of the bestseller Hillbilly Elegy, documents his traumatic upbringing amidst the land, people and culture of Appalachia, culminating in his escape from the lifestyle that entrapped his family for generations. I rarely review books, but for anyone interested in attempting to understand (some) Trump supporters and their world, Hillbilly Elegy is a must read. And a stress-free read (not academic, scholarly or loaded with long-winded, dry factual data).

The book was published before Donald Trump’s 2016 election as President. The millions who voted for him are an anomaly to many Americans who could not then and still cannot understand why folks are drawn to the Trump persona.

The people populating Hillbilly Elegy – the author’s immediate and extended family, the adults who came into and out of his life like a revolving door, his siblings, friends and neighbors, reflect the views of many individuals interviewed on the question, “Why Trump?”  Disappointment in political leaders, prejudices, lack of job opportunities, poor education, financial illiteracy, religious beliefs and adherence to fake news all play a part in the lives of J.D. Vance’s people. Reading about their struggle to survive, I understand why so many are attracted to the outsider’s (a.k.a. Trump’s) vitriol. They consider themselves outsiders and seek a savior. Unfortunately Trump is not their protector or rescuer, but a false Messiah.

The heart and soul of Vance’s narrative is his effort to move forward despite a dysfunctional family, particularly his mother’s life choices. As the reader witnesses Vance tackle one obstacle after another, it is easy to recognize why so many facing similar circumstances get discouraged.

I am not sure why Vance succeeded in overcoming his environment. Vance attempts to explain his success and offers suggestions on how to support folks striving for a better life, realizing some people cannot be helped.

Hillbilly Elegy offers insight into a world many are unfamiliar with, yet want to understand as the country experiences the Trump Presidency. Vance’s story sheds some light on the great divide challenging our country today.
Posted by Meryl Baer at 5/23/2018 10:13:00 PM