Six o’clock on a drizzly December weekday evening and already dark, it was my turn behind the wheel tackling rush hour traffic. Hub sprawled comfortably (as comfortably as possible in a small car) across the front passenger seat. We dropped Mom at her apartment on Long Island and headed home to south Jersey.

Cars converged onto roads from all directions, motorists and passengers intent on getting home ASAP, allowing no time or patience for slow drivers, for those unsure when or where his/her entrance or exit would appear, and no tolerance for cars moving merely at the speed limit on the one hand or crawling in stop and almost-go traffic on the other. 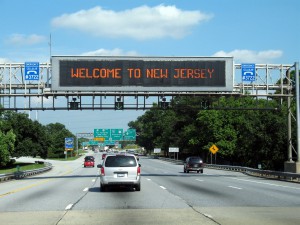 I have driven the route numerous times, but sections still prove stressful, especially a piece of road where, coming off the bridge from Staten Island (NY), millions (an exaggeration, but not much) of cars merge onto seven southbound lanes (according to Wikipedia) of the Garden State Parkway.

I maneuvered onto this wide stretch of parkway in a painstaking effort NOT to destroy myself, hub, and/or the car. As if on cue the drizzle became a downpour. I could not clearly see lane borders. The glare from parkway lamps, car lights and rain obscured pavement markings. Windshield wipers worked furiously but partly obscured the roadway, sweat crept across my forehead, hub repeatedly asked what was happening and cars sped past both sides of me – passing on the right common on these roads. Dwarfed by mammoth vans and sedans (no trucks allowed on the Garden State), the car inched forward into a murky abyss.
The vehicles created a mass movement of steel and humanity replicated, I am sure, on highways in cities across the nation.

My car is not among the daily commuters. Never was. My commute involved a six mile drive along two-lane roads, at one time country lanes but by the end of the 20th century congested suburban corridors. Driving these roads is nothing like facing metro city traffic – slow crawling traffic jams or multitudes of cars careening down the highway at breakneck speeds.

Maybe I am getting old. I am not as aggressive and single-minded as the wild drivers around me on New York and New Jersey highways determined to get someplace fast, traffic and rain be damned

Exhausted but happy, four and a half hours after leaving Long Island we exited the car, exhaled a huge sigh of relief and gently rose from a curled, bent position to an almost straight one, our bones not as flexible as years past.