Spamming the World for 80 Years

The July 4th holiday is an interesting time to celebrate things uniquely American. The birth of our nation, of course, tops the list, but another American-born item to be praised or scorned, depending on your taste, deserves attention. Although I personally have no history with this product, lots of Americans and people throughout the world love it.

I am talking about the food fave Spam. 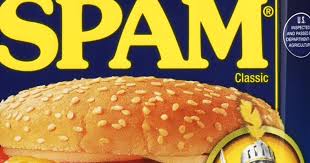 Born July 5, 1937, the spiced ham concoction introduced by Hormel Foods Corporation was created with leftovers from the production of pork products. Food manufacturers along with most Americans learned to be frugal during the Depression years, using everything, never throwing anything out that could be reused, reworked, recycled, or reprocessed.

Seeking a unique name for the product, the company held a contest. Kenneth Daigneau, who happened to be the brother of a Hormel executive, won the contest and $100 prize with his suggestion: Spam. 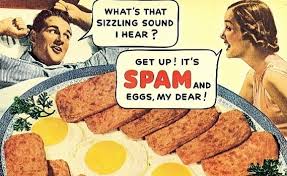 Fried with eggs for a hearty breakfast, plunked between two slices of bread for lunch, folks quickly became fans of the meat in a can. Spam became a popular food staple found in Depression-era pantries throughout the country.

According to Hormel, Spam’s six ingredients include: pork with ham, salt, water, potato starch, sugar and sodium nitrate. Cans filled with the mixture are cooked and cooled for three hours.

Without Spam, we wouldn't have been able to feed our army.
- Nikita Khrushchev

Today Spam products continue to be popular in the U.S. and 42 additional countries.

Americans throughout the country eat Spam – in red, blue and purple states, the poor and occasionally the rich (who were probably poor when introduced to Spam), and rednecks -

You might be a redneck if in an effort to watch your cholesterol
you eat Spam Lite. - Jeff Foxworthy 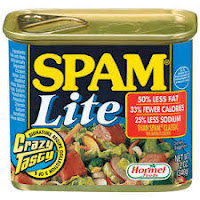 Spam fans can get their fill of the product and its history at the Spam Museum in Austin, Minnesota, south of Minneapolis.

And to clear up any confusion in the minds of folks today, the food Spam gained popularity long before spam became a synonym for junk e-mail.

The term for junk email originated from a 1970 Monty Python’s Flying Circus skit. All of the restaurant’s menu items turn into Spam and when the waitress repeats the word Spam, a party of Vikings sing “SPAM, SPAM, SPAM, SPAM, SPAM, SPAM, SPAM, SPAM, lovely SPAM!  Wonderful SPAM!”, drowning out other voices.
Exactly when this episode morphed to Internet messages is shrouded in mystery. However it happened in different places in a short period of time. Users in these first occurrences chose the word “spam” referring to the 1970 Monty Python sketch where Spam singing overwhelmed conversation, and Spam appeared unwanted all over the menu. 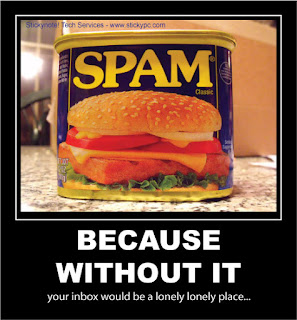