My family sees each other regularly, but not routinely. My kids live several states away, and other family members are a three or four-hour drive. Mom, despite our pleadings to move closer, also lives three hours away.

Which might not be too bad, except the drive to Mom’s is through one of the largest, most congested metropolitan areas in the world – the New York City metro region, characterized by high tolls, traffic congested highways, expensive gas, and roads that suck in poor condition.

Family get-togethers rarely involve everyone, so it is nice when a major event draws folks together. This past weekend most of the clan descended on Lancaster County PA for my niece’s wedding.

For my sons it was a homecoming, the place they grew up and left years ago. Since hub and I relocated the boys do not return to their childhood hometown. Jason road tripped old haunts and chatted with neighbors. Matt discovered a new craft brewery/restaurant where we rendezvoused for lunch. Hub and I complained about the traffic. Residential and commercial development boom but roads remain, for the most part, two-lane slow-going meandering parking lots pathways.

Unloading the car I made a disastrous discovery. The suitcase with our clothes was in the trunk, but a furious search of the entire vehicle triggered the realization that a second bag packed with shoes and makeup was missing, left on the floor of the bedroom at home. Three hours away.

There was no way I could go to the wedding without makeup. I would feel naked. Makeup is not a magic elixir, but psychologically helps me feel better about myself. Not that anyone (but me) cares how a 60-something looks…

Hub and I made an emergency shopping trip to the nearest department store. I found a pair of white sandals ($16 – a true bargain originally marked $50) and purchased some makeup – not on sale. Hub also bought a pair of shoes, marked down but not as great a bargain as my sandals…

Sunday was sunny and hot and at 5:00 p.m., official start time for the wedding, the sun still blazed in the sky. As we walked from the parking lot to the reconditioned barn now banquet hall, families played miniature golf on one side of the barn while on the opposite side golfers practiced on the driving range. A typical summer Sunday afternoon. 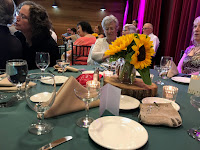 We are an extended blended family religiously. Living in Lancaster County for decades I became familiar with its conservative environment. Politically, religiously, culturally – except for Lancaster city, a liberal-leaning oasis in the center of the county – the area evokes conservatism leaning right. Far right.

Some members of my family, not having the privilege of ever living in Lancaster County, were not as familiar with the culture as hub and I. The evening proved an eye-opening experience – the fundamentalist Christian marriage ceremony, the country band, women in head coverings, cowboy hats donned by friends of the groom. Women’s attire varied from bare-shouldered sleeveless dresses, short skirts, and form-fitted outfits to looser fitting plain dress.

Polite table conversation avoided political discourse. I was surprised, however, to meet a friend of the groom who proudly announced she was Scandinavian, her blond hair and fair skin proof of origin. Somehow she knew I did not quite fit in with most of the guests (pointed out by a member of the bride’s family? Did my clothes or appearance give away my political preferences?) She chatted about how she tried to convince the groom to vote for Hillary, but was unsure of her success. (I doubt she won that argument. The bride is a Trump fan.) She also said how excited she was to learn that tenants at a rental she owned marched in Washington.

I strongly suspect, however, she was a lone figure (except for members of my family) in a crowd of conservatives.

A highlight of the evening is shown in the following picture, my 92-year-old Mom dancing with her grandson. 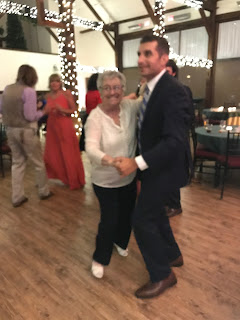 The family dispersed Monday morning, piling into cars and returning home. One son departed 5:00 a.m. to drive to Vermont in time for a noon business meeting. Another car headed to the airport. Hub and I drove my niece and Mom into Philadelphia, my niece on her way to work and Mom taking the train home. Cars headed west, east, north…home.
Posted by Meryl Baer at 7/11/2017 11:51:00 AM