The boomer generation buys lots of stuff. We travel, we eat out, we indulge our kids and grandkids, and we spend oodles of money on medical care and health-related products.

Boomers disperse so much money we inadvertently became saviors of some companies whose business would decline, and maybe fail, without us.

One of these lucky industries is paper manufacturing. The 21st century term International Paper uses to describe their business is ‘fiber innovators’.

And we – the boomer generation – came to the rescue! Boomers, along with aging populations around the world, salvaged the slumping fortunes of paper companies.

Healthier than previous generations, boomers still succumb to age-related maladies and require the on-going use of certain products. One particular item is on the upswing.

And none of them, or very, very, very few, are the cloth kind. Disposables rule.

Not every senior, or a majority of seniors, will require the product. But even a tiny minority using diapers daily adds up to a lot of diapers. Tons of sales every day. Ka-ching, ka-ching… 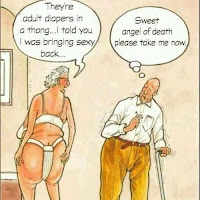 Yup, incontinence – defined as “leaking urine you can’t control” – is a major health issue, and incontinence merchandise a growing market. One-quarter to one-third of adults suffer from some degree of incontinence. The good news is that new products are not as big, bulky, and uncomfortable as older designs.

Capitalizing on the declining health of our generation and the increasing life span of most people around the world, the paper industry, or at least a couple of the big players, discovered aging populations were the key to prosperity for decades to come.

We boomers provide economic windfalls to many businesses and industries, and have done so ever since purchasing our first 45s, make-up, and comic books. We continue to help fuel the economy. Boomers rock! And pee. Often.
Posted by Meryl Baer at 3/12/2017 08:50:00 PM