Quiet Drive and An American Flag 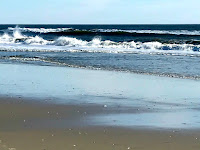 Driving along the coastal road through almost-deserted resort towns on the last day of 2016, quiet streets and few cars marked the landscape, so different from the traffic-clogged roads of summer. Gray-green ocean waters glistened under the cloudless sky. Low, shallow waves rippled, overlapping, collapsing onto the sand and finally disappearing back into the sea.

A gentle last day of a chaotic year.

Pizza shops advertised with lighted open signs and every town’s Wawa (convenience store) boasted cars in the lot. One town’s main street defied off-season abandonment, decorating and open for business during the holidays.

In front of a seafood market obviously closed, windows shuttered with a large sign on the door thanking patrons for their business and looking forward to seeing everyone next spring, a flagpole in the parking lot caught my eye. An American flag fluttered in the slight wind.

A quick drive-by piqued my curiosity. At first I thought the light gave the flag an off-color, but as the car approached and passed I asked hub to turn around for a closer look.

Hub parked in front of the flagpole. I leaned out the window. Now I was sure my eyes did not deceive. A black and white flag with a blue bar replacing one white stripe flew from the flagpole. I snapped a picture and we drove on. 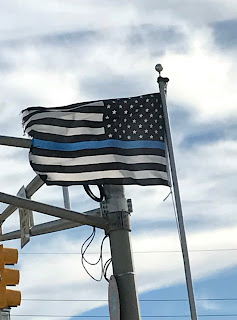 What would we do without Google? I googled on my iPhone “black and white flag blue line,” and a slew of responses immediately appeared on the small screen. I had never seen the flag before but discovered it is not a new configuration, flying from various places around the country since 1988.

The flag honors law enforcement, memorializing the fallen and honoring those currently serving. My guess is a member of the family that owns the seafood market where the flag flies is a police officer.

Controversy, a typical American reaction to…everything, surrounds the flag. Some people consider it a desecration of the traditional American flag. But Amazon, among other retailers, sells flags, T-shirts and other items featuring the blue line flag.

Hub and I continued our tour of shore communities, relishing the quietude. The march forward is unrelenting, and come summer the world will once again intrude on these peaceful islands.

It would be lovely if this year stable, calm times, like a long winter at the shore, lasts much longer than the ugly domestic and world events upsetting our lives too frequently nowadays.