The car has become... an article of dress without which we feel uncertain, unclad, and incomplete.
~Marshall McLuhan, 1964

America’s love affair with the car stretches back to the moment the first Model T Ford rolled off the Detroit assembly line on October 1, 1908. Gas and electric cars were initially developed in France and Germany, but Americans adopted the automobile and made it theirs.

America’s wide-open spaces begged for a low-cost, convenient means of transportation. Trains did not reach everywhere. Horse-and-buggies were slow, uncomfortable and tedious.

Cars changed the face of America and Americans fell in love with their cars. I am going to take a leap and say most car lovers are male. I owned a couple of cars I liked, specifically a red Saturn and a red PT Cruiser. But I do not love cars. Hub gets mad at me when car shopping, asking, “What kind of car do you want?” My response: “A reliable one. With great gas mileage,” not caring about things like horsepower, engine size, emissions, wheels, weight, etc. We replaced cars when the eight- or ten-year-old vehicle constantly broke down, almost nickel and diming us to the poor house.

The Model T was not the first vehicle aimed at the growing middle class, but Henry Ford combined state-of-the-art design and reasonable pricing to produce a “car for the great  multitude”. The first Model T sold for $825, about $20,448 in 2016 dollars. 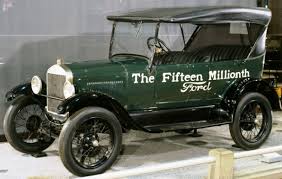 The average American could seriously think about buying a car. Commuting to work, taking Sunday drives with the family, going on vacation; “motor touring” changed the country’s work and play habits. Despite the fact that cars broke down frequently, we bought them, drove them, pampered them, took pictures in, on and around them. Cars starred in songs, artwork, ads – everywhere.

But today America’s love affair with the car is changing. I grew up a suburban kid, and the car transported us everywhere. Today hub and I live in a walkable and bikeable community and love it.

I marvel at the SUVs and other mega cars maneuvering congested highways, parked at malls, sitting at traffic lights, standing in long lines to pick up kids at school. Cars will always be an integral part of America’s lifestyle.

However I am happy thrilled to be part of a growing minority of Americans getting reacquainted with mass transit, bicycles, and their own two feet. We will (hopefully) transform the landscape of the nation once again.
Posted by Meryl Baer at 9/30/2016 10:05:00 PM