Witness to Feel the Bern 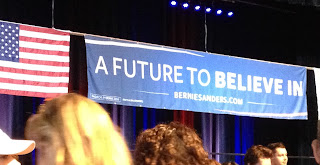 The alarm rang at 6:45 a.m. I dragged myself into the shower, dressed and meandered into the kitchen for a bowl of cereal. I flicked open my computer to scan email and local news. The picture stared at me – Bernie fans in line at 5:45 a.m., patiently waiting for his appearance later that morning.

“I don’t know if we’ll get in. People already in line,” I said to hub, engrossed in his morning cereal.

“If we don’t get in, we’ll find a place for coffee. It’s OK,” he responded. Obviously missing Bernie would not ruin his day. We wanted to see and hear Bernie, but not enough to rise pre-dawn.

We finished breakfast and headed out the door. A quick walk to the bus stop, and a few minutes later we were on our way into Atlantic City for the big event.

By the time we arrived at the Convention Center the line of enthusiastic supporters was gone, everyone inside the ballroom milling around, talking, chanting, and waiting. A mixed crowd skewed on the young side, but nowadays when we go anyplace the crowd is younger than we are, often by decades.

A man from a nearby town stood (no seating) next to us with his 10-year-old son, eager to introduce him to American campaigning in action. Another couple, directly behind us, brought their 4-year-old twins and baby in a car carrier along. I moved carefully, not wanting to tread on the baby.

This is an unusual Presidential campaign season, too long, too negative, with developments no one anticipated. The last candidates standing are not necessarily the best, but why would the best undergo a grueling campaign - attacked personally and professionally - required to win the nomination?

When I read Bernie would be in town, I decided to see and hear the man in action.

As an aging boomer, I am awed by his stamina. At 74 years old – he would be 75 if inaugurated President in January 2017 – he stood at the podium over an hour and spoke eloquently, only a few cue cards prompting him of important points he wanted to make. Later the same day he spoke in California. (New Jersey and California primaries are June 7). There is no way I could get up early, get myself together, make a long speech before a crowd of 1,000+, hop on a plane, fly cross country, get myself together again (physically and mentally) and make another major speech.

Clinton and Trump are not spring chickens either. I have to wonder how any of them will manage as President over the next four years. Most of their contemporaries will spend their days lounging in the sun, playing golf, canasta or Mah Jongg, traveling in leisurely style…

But I am getting off point. 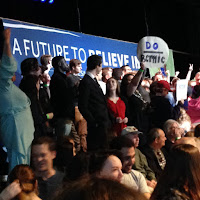 We waited over an hour for Bernie’s appearance, standing the entire time. A local casino employee, a city councilman, the President of the local casino workers’ union, the head of Bernie’s New Jersey campaign, all spoke for a few minutes.

Finally the man himself, accompanied by his wife Jane, strolled to the podium in the center of the ballroom floor. The crowd went wild, eventually settling down so Bernie could speak.

Bernie discussed his main campaign points, including free public college tuition for everyone, a $15 minimum wage, foreign trade strategies, reigning in Wall Street, a single payer health care system based on Medicare, and climate change policies. He spoke at length about the candidate with a strong Atlantic City connection, Donald Trump, the businessman who entered the city, established hotels, raked in the money, then declared bankruptcy, leaving employees and local businesses behind without any consideration. The event marked the beginning of a new and unfriendly period for the city. Employees lost good jobs; many businesses went bankrupt or struggled to remain in business when not paid by Trump’s bankrupt entities.

Vulture Venture capitalists like Carl Icahn swept in, uninterested in investing and bettering the community but totally engaged with taking as much money as possible out of the area. They bought distressed properties and proceeded to profit at the expense of locals, working hard at stripping employees of a living wage and benefits.

But once again I digress…

Bernie was engaging, interesting, forthright, and understandable. I add the last because, if anyone has heard or read Trump’s speeches, they are anything but…

I am unsure who will receive my vote. (full disclosure: I will NOT vote for Trump). Bernie’s chances – despite his assurances of mathematical success – are slim to none. I have read that his ultimate aim, realizing he will not be his party’s standard-bearer, is to get his ideas in the Democratic platform.

I am glad I witnessed a tiny part of our political process in action. Personally I think the Presidential campaign is too lengthy, too expensive, and strains everyone’s patience and tolerance. I am already tired of the rhetoric, and there are six more long, long months to go before Tuesday, November 8th  (182 days from May 10) - Election Day.
Posted by Meryl Baer at 5/10/2016 02:06:00 PM