Honoring Mom is an annual American rite, and the practice has spread around the world. But celebrating Mother is not a new idea. The ancient Greeks and Romans revered Mother goddesses Rhea and Cybele.

Rhea, Mother of the gods, goddess of fertility, motherhood and generation, represents the eternal flow of time and generations. Rhea translates to flow and ease, the ‘flow’ suggesting menstrual blood, birth waters, and milk.

Rhea’s significant other was Kronos, king of the gods. Kronos received a prophecy that one of his children would depose him. To avoid this disaster, he devoured each child as soon as it was born. Rhea eventually had enough. She bore her youngest child in secret, hid him in a cave on the island of Crete, and presented Kronos with a stone wrapped in a blanket, which he immediately consumed. The baby’s name was Zeus.

Zeus grew up, overthrew and imprisoned his father (Father’s Day was not a Greek or Roman tradition). Zeus also made his Dad throw up the previously ingested children, all of whom went on to live enchanted lives as Greek/Roman gods and goddesses.

Moving along through history, a European Christian holiday called Mothering Sunday replaced a celebration of goddesses. Commemorated on the fourth Sunday during Lent, people returned to their ‘mother church’, the main church closest to home, for a special service.

Ages passed and the religious holiday morphed into a secular day, children showering their mothers with flowers and other tokens of appreciation. Ultimately enthusiasm for setting aside one day a year to express appreciation for Mom waned, so our story continues in the New World.

America’s Mother’s Day story begins with Anna Reeves Jarvis, mother of 11, 12 or 13 babies (records are incomplete) born in the mid-1800s. Most of the children died from a variety of diseases; only four lived to maturity. Anna became a social activist and organized Mothers Clubs, the major goal of the group reducing infant mortality. Following the Civil War Jarvis arranged Mothers Friendship Day get-togethers for mothers and Union and Confederate soldiers, the objective fostering peace and reconciliation.

Jarvis lobbied to place Mother’s Day on the national calendar, arguing holidays heavily favored men and their achievements. In 1908 she arranged a Mothers service in Andrew's Methodist Episcopal Church in Grafton, West Virginia, the church now the International Mother's Day Shrine and a National Historic Landmark.

Jarvis’ persuasive marketing paid off and in 1914 President Woodrow Wilson established the second Sunday in May as Mother’s Day.

Mother’s Day quickly evolved from Jarvis’ idea of visiting Mom and attending church into a uniquely American phenomenon centered on buying flowers, cards (Hallmark notes Mother’s Day is #3 on the holiday card list, outspent only by Christmas and Valentine’s Day), candy, gifts, and eating out. The day is, according to the U.S. National Restaurant Association, the most popular day to dine out. Why anyone wants to eat out when the rest of the country also patronizes eating establishments I have no idea, but people eagerly flock to restaurants for brunch and dinner, stand in lines, jostle with crowds, wait for service, get served food hopefully hot but often not...My email box overflows with restaurant ads for Mother’s Day specials.

Ironically Jarvis lived long enough to become horrified by the commercialization of the holiday and worked to abolish it. She spent all her money in the endeavor but failed, dying penniless in a sanitarium.

Today Mother’s Day is a well-established, widely celebrated national holiday, an integral part of American culture. Strongly promoted by retailers and restaurants, it is a day to honor all kinds of mothers, and another reason to open our pocketbooks and boost the American economy.

Thanks for the memories, kids. 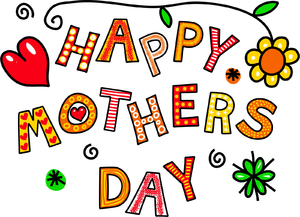