The family business Grandsitters R Us is on the move, all the way to Florida. Hub and I look forward to a busy, exhausting week grandsitting three kids while son and daughter-in-law enjoy a few kid-free and carefree days.
As usual we booked our flight on the budget airline out of our local airport. And, as the saying goes, you get what you pay for, which in this case means:
* Tight, narrow seats, negligible legroom and almost no space between the seat table and one's stomach.
* No free drinks or food (unless providing your own).
* Full or almost full planes with no chance of moving to an open window or aisle seat and not be crammed between two sizable adults.
* Barely enough aisle space for an average-sized boomer body to squeeze through.
* No wi-fi, no magazines (unless bringing your own), and no screens to view movies, TV shows, or airline videos on what to do in an emergency.
But the airline offered something not previously experienced on this or any airline. I do not know if Spirit is the first company to offer the amenity or if they are following in the footsteps of other corporate innovators.
I took pictures of this new free in-flight entertainment package presented to all passengers. After all, sometimes a picture or two explains much better than words ever could. Here is a picture of my in-flight entertainment: 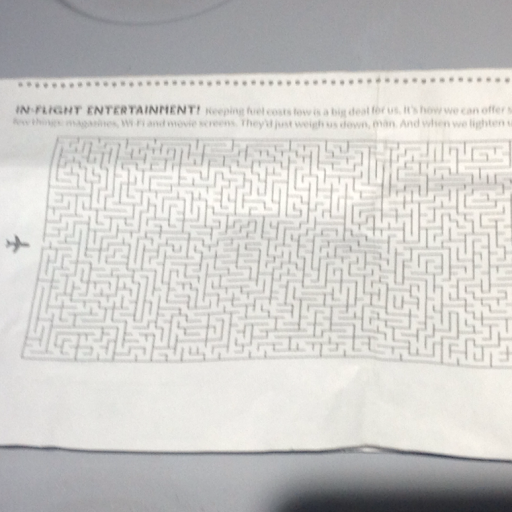 And here is hub's: 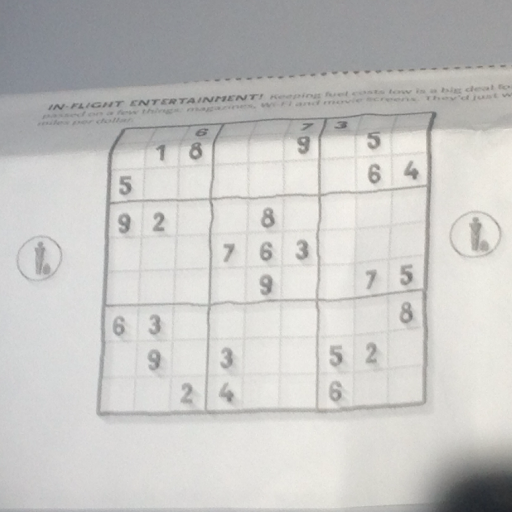 Fly Spirit Air and you, too, can enjoy your two, three, or more hours in the air working on a maze or figuring out the soduku puzzle.
The joys of flying never end!
I must close with a disclaimer:
I was not paid by Spirit Air, the maze makers, or soduku company to feature their products. The opinions in this post are solely my own. I have not been influenced by an intimate TSA pat down, a delayed flight, air turbulence, or any other issue encountered during the trip.
Posted by Meryl Baer at 1/07/2016 12:28:00 PM