The Norwegian coastline is an endless array of craggy stone mountains, snow-capped throughout winter, treeless and barren year round, soaring on either side of deep blue fjords, inlets of the sea formed millions of years ago when the glaciers retreated.
Sailing south along the coast, additional hours of daylight greeted us. Our last day aboard ship the sun shone and the stark blue sky delighted eyes grown accustomed to darkness.
Highlights of our adventure...
Norwegian folk songs and Christmas carols chanted at a midnight concert in the Arctic Cathedral in Tromso.
A visit to the Magic Ice house in Svolvaer, a warehouse chock-full of ice sculptures of Vikings, trolls and sea creatures. An ice bar supplied drinks to warm our insides. Hats, gloves, coats, boots and scarves also helped!
Ice cream in what is advertised as the best ice cream shop in Norway. Flavors vary with seasonal ingredients. The fresh ice cream was very good, but I remain a Ben and Jerry's fan. 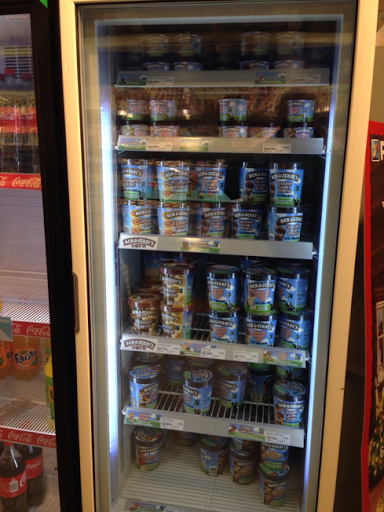 Lots of choices for Ben and Jerry fans!
Shops similar to Wawas and 7-Elevens sell the ice cream.
And 7-Elevens are everywhere in Norway.
While on the subject of food...I never thought I would get tired of lox, but by the end of the cruise opted for other offerings.
Night walks on the ship's observation deck, necks stretched back, eyes searching the sky for the Northern Lights.
Hub and I participated in an inaugural trip (members of an elite group of excursion virgins) to a marble mine (not part of our Road Scholar program). Donning hard hats and life jackets, we rafted along mine waters in the interior of a mountain, tasted fresh-tapped mountain water, enjoyed local fare (vegetable soup and flat bread), and learned a bit about marble mining. The road leading to the mine - a word used loosely, as it was more a snowplowed path - caused heart palpitations as the tour bus maneuvered hairpin turns in darkness during a snow storm, the ride downhill more precarious than the trip up the mountain. No guard rails, only a driver with experience navigating Norway's roads. He also played the accordion, entertaining us during our meal in the mine.
Bus excursions into the countryside and walking tours of towns illuminated by holiday decorations brightened our days and provided opportunities for fresh air and exercise. We were lucky temperatures hovered around 32 degrees, moderate for December, although bundling up a necessity before venturing outdoors. Wind our adversary, freezing temperatures along with strong blasts occasionally limited outdoor activity. We experienced snow, rain and a mixed bag while wandering ice-covered streets and sidewalks, heated pedestrian paths, lighted walkways and rocky, uneven trails. 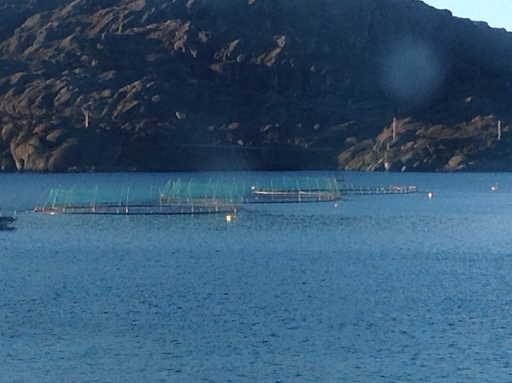 Commercial fishing and fish farming are major industries. These are salmon holding centers, part
of a fish farm operation. 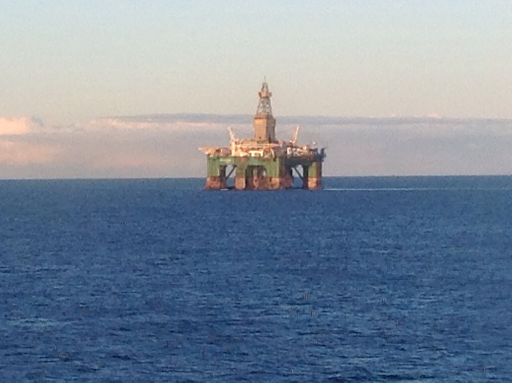 Oil has made Norway a prosperous country.
The days passed quickly and suddenly discussions of disembarkation procedures and flights home jar us back to everyday lives.
Following two plane rides and a two hour drive, we arrived home 5:00 p.m., 17 hours after leaving our hotel in Norway. After a quick take-out dinner from our local pizza shop, hub fell asleep at 6:00 p.m. and I lasted until 7:30 p.m., sleeping until morning while dreaming of fjords, fish, snow-capped mountains, and a rolling ship.
Posted by Meryl Baer at 12/18/2015 08:46:00 PM