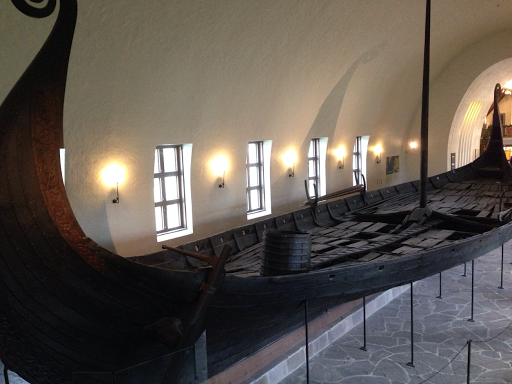 Viking ship built about year 1000
(Originally I titled this post Discovering Norwegian Sagas, but did not want to admit there are large gaps in my knowledge of Norwegian history.)
The first night following our flight to Norway I slept until dawn.
9:20 a.m...
Not a lot of daylight this time of year in the Land of the Midnight Sun. We definitely will not observe the Midnight Sun this trip, an experience which will have to wait for a summer visit.
We had a day on our own before our tour program commenced. Purchasing Oslo passes, allowing access to public transportation and a number of museums, hub and I set out to explore the city.
We found buses and trains clean, scheduled only a few minutes apart, not over-crowded, with upholstered seats and light, airy cars equipped with large windows. No graffiti. The underground train stations were well lighted, clean, with enough signage that we did not get lost!
The Kon Tiki museum, our first stop, the story a vague shadow of a memory lingering in the back of my less-than-great memory, tells the story of Thor Heyerdahl's adventures crossing oceans in replicas of ancient rafts. I found most interesting his theory that beliefs are not always right just because 'everyone' believes them. He set about proving some commonly held historical ideas wrong.
Building a craft similar to ones used thousands of years ago by Peruvian inhabitants, he sailed in what his contemporaries labeled an unseaworthy vessel to Polynesia. 101 days after leaving Peru (the year 1947), he landed on a Polynesian island, disproving the assumption that South Americans could not have sailed west to these islands. Whether they did or not has not been established, but they could have.
Next the Fram Polar Museum and a walk through the ship used by early 20th century explorers charting the Canadian Arctic islands and waterways, Greenland and nearby northern waters. The ship also sailed to Antarctica with a group of hardy explorers (I would say crazy men - no women on board - I am not enamored of spending months and possibly years on board a ship and in tents lacking central heating in subzero, harsh weather conditions). 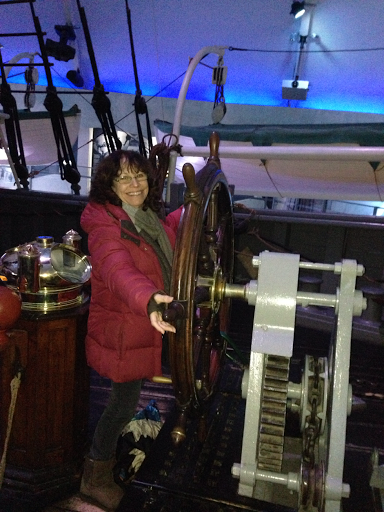 Piloting the Fram. Unfortunately, since I cannot see over the wheel an therefore have no idea what is ahead,
I would probably wreck the ship.
Our official Road Scholar program began with John (our esteemed leader throughout the trip) previewing tour details, followed by dinner at the hotel, the food not worth mentioning. However lattes and other coffee drinks from the hotel coffee shop/bar tasted wonderful!
Posted by Meryl Baer at 12/06/2015 05:44:00 AM