Communities along the Norwegian coast beckon winter travelers, offering warmth, good food and drink, local hospitality, tourist attractions and modern amenities. But venturing into the countryside the fierce Arctic winter stuns while at the same time captivating the first time visitor.
The North Cape, wind-swept and desolate - especially in winter - is on an island jutting into the sea beneath, the place where the Norwegian Sea (part of the Atlantic Ocean) meets the Barents Sea (part of the Arctic Ocean). Leaving our warm cocoon on the ship, we boarded a toasty bus and belted up. Norwegian law requires bus passengers wear seat belts.
The black landscape appeared ominous and although a steady snow fall looked pretty, we could not help but feel insecure.
Drifting snow often closes area routes. Ensuring a safe arrival at our destination a snowplow met the bus, carving a path along the snow-covered road.
It was afternoon but felt like the middle of the night. Dim lights from town and an occasional home along the way was not enough to pierce the darkness as our caravan meandered up the mountain. Scanning the road ahead or behind grew difficult, blowing snow blocking any view illuminated by bus headlights, the moon, and the white landscape.
Tentatively stepping off the bus at the North Cape, we walked slowly along a snow-covered path to the globe, a monument marking the Cape as the point farthest north on the European continent. Ice beneath the snow made walking hazardous. Wandering further out onto the cliff the wind grew stronger and fiercer. It became a challenge remaining sure-footed. 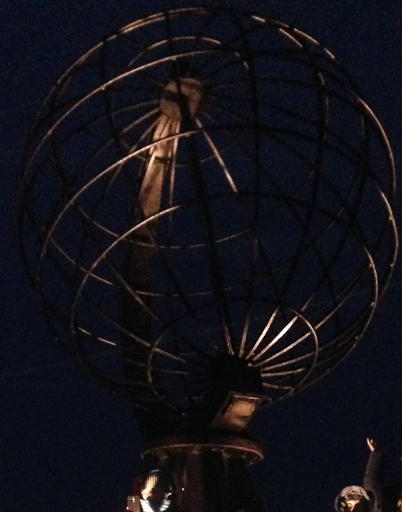 The Cape globe
Lights strategically placed provided enough light to safely maneuver, but no one stayed outside long. After viewing the globe, snapping pictures and walking along the perimeter, peering down into a black abyss, we headed for the information center/cafe/gift shop/museum, normally closed in winter but opened specifically for our ship's visitors - our Road Scholar group and a few other hardy souls. During the summer five or six thousand visitors a day mill around observing the midnight sun. 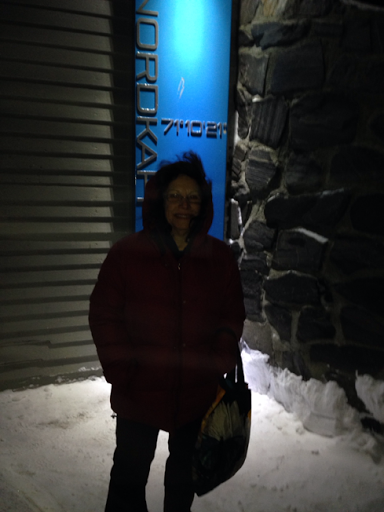 Sign on the Cape information center marking the North Cape latitude.
The dark days attract few tourists.
The snowplow led the way back into town. Meanwhile employees at the Cape visitors center closed the place and were escorted into town, returning to their warm, welcoming homes.
Cell phone service is sporadic and often non-existent along country roads, especially in poor winter weather. To prevent people getting stuck and unable to contact help, convoys lead travelers along the roads around the island when conditions warrant. A schedule is posted regularly and meeting places listed. Locals plan their shopping, errands and other travels accordingly.
The North Cape was the most daunting, hostile and coldest place visited during our voyage. As we sail south again, additional daylight hours and more temperate weather should prevail.
The North Cape, an experience to remember but not necessarily repeat. At least not in winter... 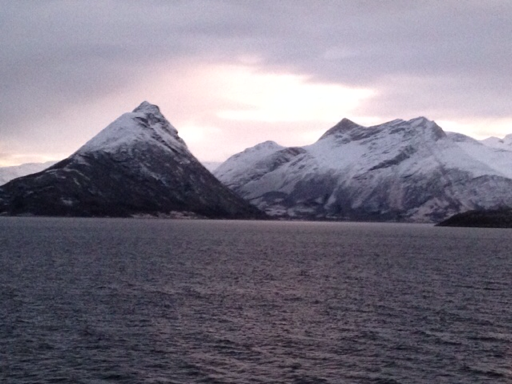