I Can See Russia From My Bus Window!

We exited the bus at the eastern edge of Norway and walked right up to the Russian border. Although an open gate beckoned, our guide told us - quite emphatically - NOT to step into Russia. We would be arrested and fined - by Norway - a hefty $10,0000 USD. And do not think we could get away with it, the Norwegian guide emphasized, security cameras posted everywhere do not miss anything... 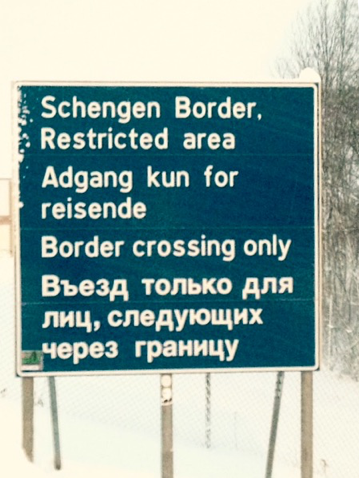 No guards in sight, but buildings immediately inside the gate probably kept border patrol personnel warm and cozy.
The crossing separating Norway and Russia,the Schengen Border,  is a cold, snowy, windy, white and forbidding place in winter. Yet there is a surprising amount of activity. 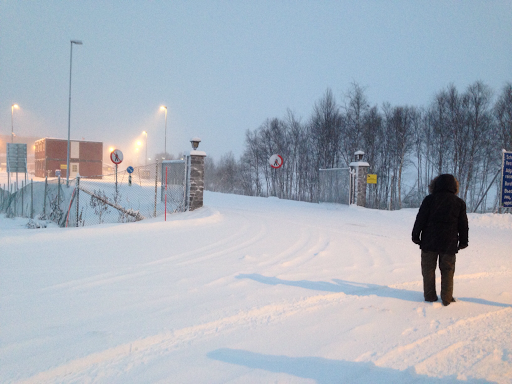 Cars cross in both directions. Russians venture into Norway to shop, lured by the variety and selection of merchandise. The closest town, Kirkenes, caters to these shoppers, boasting stores in much larger numbers than the town population warrants.
Norwegians venture into Russia because of the cheap prices, especially for commodities such as vodka and gasoline.
The Sami, the area's indigenous people, travel unencumbered across the borders of Russia, Norway, Finland and Sweden.
Anyone living within 30 kilometers (about 18 miles) of the border, on either the Russian or Norwegian side, can cross unimpeded.
Tourists arrive (on the Norwegian side) and gawk, take pictures and browse in the souvenir shop, a small red wood shack selling Russian merchandise.
Recently Syrian refugees crossed over on bicycles, but two weeks ago Norway closed the border to the newcomers. (Norway accepted about 35,000 Syrian refugees in 2015.)
The refugees' travels often proceeded as follows:
Travel to Lebanon, a train ride to Moscow, a plane flight to Murmansk, followed by travel to Nikel (about a two hour drive from Murmansk), the nearest Russian border town. The refugees purchase bicycles for about $150-$250 USD, then take a taxi to the border and cycle into Norway.
Why bike across a snow-covered path?
Because a Russian law states individuals must cross the border on wheels - no one can walk across, and Norway will not allow vehicle passengers into the country without proper documents.
Cyclists immediately abandon the bikes in Norway because they do not meet safety requirements.
Although this time of year darkness prevails 24/7, a couple of hours of morning twilight provides enough light to view the sites.
We reached the Russian border within that tight time slot.
Yes, we could see Russia!
Posted by Meryl Baer at 12/13/2015 07:57:00 AM