On the road again: The New York Thruway

I cannot remember my first time on the New York Thruway, a straight shot from New York City north to Albany, then a left to Buffalo, 496 miles. We did not drive the entire way (thank goodness!) exiting south of Albany. I was a passenger in either my parents' or grandparents' car and probably five or six years old. My grandparents bought a bungalow in the Catskill Mountains in the early 1950s and my sister and I spent summers there for years.
Grandpa drove to Long Island from his mountain retreat our last day of school and Janice and I joined him on the drive back. Mom and Dad visited a couple of times over the summer and retrieved us a day or two before school started in September.
I attended college in Troy NY. The two roads north from our house were the Thruway and the Taconic Parkway, a windy road. Whether driven by parents,  friends or bus, the route of choice was the Thruway.
Traffic is the first Thruway memory that comes to mind. New Yorkers fled city and suburbs summer weekends, winter weekends, fall and spring weekends and holidays. Whether going north or south, traffic was a common frustration.
One time in bumper to bumper traffic the driver behind us lost patience and, refusing to stop, hit us. Not a lot of damage and no one hurt, but it was frightening and delayed our arrival at grandma and grandpa's.
Large gaps in occasions to travel north occurred following marriage and kids. Then second son decided to attend college in Vermont. And never left. (Vermont, he did leave college.)
Once again I found myself on the NY road. Sometimes in beautiful weather, occasionally in snow, too often landing in traffic driving south when tired and looking forward to home.
It is a long trip from our house in south Jersey to Burlington Vermont. Getting around and north of NYC is always the high point (actually low point a more accurate description), a challenge attempting to avoid traffic, construction, accidents and whatever else the metro area decides to throw our way.
Once on the Thruway the landscape improves. Trees replace buildings and endless expanses of concrete and pavement.
It is mid October, leaf peeping time. More color meets the eye the further north we venture.
We were told to pack jackets, gloves and hats. Supposed to be cold Saturday. 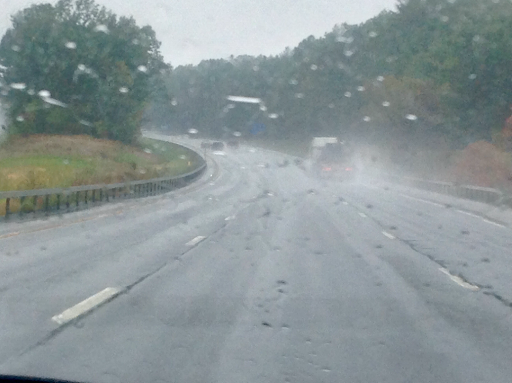 Now it is raining. We are in the midst of a Friday afternoon, three-day weekend, escape to New England traffic jam. I would describe the trees in all their fall glory, but rain and fog obscure my view. Maybe construction is the cause of our creeping, although my guess is workers abandoned the site when the rain began.
We never stop at the first service plaza passed, Sloatsburg, too big and too crowded. The further north we drive, the less crowds encountered. We just hope our bladders hold out...
Posted by Meryl Baer at 10/10/2015 09:25:00 AM