Hub's parents were spending the weekend at our house sometime during the late 70s when the phone rang. By the time my mother-in-law finished the mysterious conversation, she was upset and in tears.

That was the first time I heard Penny's name and when I learned of her existence.

Fast forward thirty plus years and hub and I travel to the Berkshire Mountains of Western Massachusetts where hub's first cousin, Penny's son, would tie the knot with his soul mate.

We have known Gary about five years. No one in the family knew about him until he began searching for his birth parents and siblings. We met for the first time at a restaurant. Walking in I knew immediately he was a Melamed. Short and slim like all the Melameds, small boned they used to say, with facial features undeniably connecting him to the family.

Gary's mother Penny disappeared for years, reappearing for a short time and leaving again. No one knew where she was or what she was doing.  She left the first time when a teenager, in the 1940s. She bore a son in the early 50s given up for adoption and another baby, a girl, in the early 60s, also given up for adoption. The family did not know Penny gave birth to a third baby in the late1950s, a boy, until the child located his birth mother's family.

By the mid 60s Penny lived in Greenwich Village in New York City. She reached out and reconnected with family to a limited extent.

Few pictures of Penny exist. Immigrant parents struggling to support a family during the 20s and 30s could not afford cameras and pictures. Family photos show up in the 40s and Penny appears in only a couple. 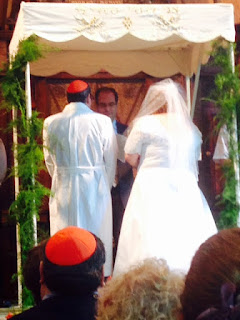 Hub and I walk into the sanctuary, tentatively look around and occupy two seats. We are strangers here.

Absolute quiet pervades the room, everyone waiting in respectful silence for the ceremony to begin. No one rustles program pages, teenagers do not whisper, poke each other and giggle. No one moves, a few seconds frozen in time.

A soft melody breaks the silence. In unison, as if prompted, we turn to the back of the room. The procession begins, maid of honor and groomsmen, ring bearer and flower girl, then the groom. We stand while the bride walks down the aisle and joins her groom under the chuppah, the traditional canopy for Jewish weddings. Seated once again, we watch the service, witnesses connecting generations.

Less than a week later, seated in the exquisitely ornate Board of Supervisors room in San Francisco's City Hall, we witness another couple tie the knot.
Hub and the bride crossed paths years ago in the course of business. They now work for the same company and are part of another type of modern family, the workplace family.

The ceremony temporarily unites the couple's diverse families, guests gathering from around the world. The groom's parents and brother traveled from New Zealand, the bride's parents from North Carolina, friends and colleagues from around the country and Europe. An American civil ceremony, an evening reception with a taco food truck, and a Saturday afternoon lawn bowling barbecue comprise the wedding festivities.