The Passing of the Passenger Pigeon

I doubt anyone or anything – newspapers, magazines, TV news broadcasts or tweets – will commemorate the landmark event of 101 years ago.

No drum roll, no banners, just a sad asterisk in history.

On September 1, 1914, Martha, believed to be the world’s last passenger pigeon, died at the Cincinnati Zoo. 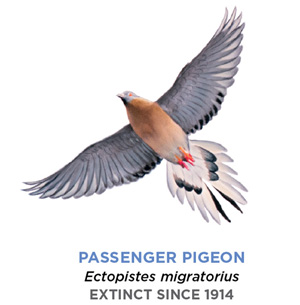 The passenger pigeon numbered in the billions during the 19th century, yet disappeared from the face of the earth by the early 20th century. At one time it was the most numerous bird in North America, traveling in groups, eating and nesting together, then moving on, roaming from southern shores along the Gulf Coast to woodlands in the northern states and Canada. The numerous densely packed birds offered easy prey.

The birds needed vast forestlands to support their population. Deforestation and hunting depleted flocks. The pigeons produced a couple of eggs per year. Their reproduction rate could not make up for the multitudes killed.

The bird may have faced extinction eventually because of an inability to adapt and share the continent with newcomers, but humans never gave them a chance.

I doubt many took notice of the passenger pigeon’s demise. People were too involved in the events of the time, such as World War I, which began a couple of months earlier in Europe.

The term climate change was decades from becoming part of our everyday lexicon, and conservation a new idea introduced to the American public by a small number of forward-thinking politicians, scientists, writers and artists.

Over the past 500 years over 1,000 species disappeared forever, many a result of human activity. A timeline of some of the creatures declared extinct from 1600 to the present can be found here.
There is probably no one alive who remembers seeing a passenger pigeon. Out of sight, out of mind, what we never knew or experienced we do not miss. We may not mourn the passenger pigeon, but how many animals and plants and habitats must disappear before recognizing hey, you know what? We do miss them…

"We have become great because of the lavish use of our resources.
But the time has come to inquire seriously what will happen
when our forests are gone,
when the coal, the iron, the oil, and the gas are exhausted,
when the soils have still further impoverished
and washed into the streams,
polluting the rivers, denuding the fields and obstructing navigation."
-  Theodore Roosevelt