One Friendly Summer Day in The City

I boarded a Greyhound bus in my hometown at 8:00 a.m., traveling from my fairly quiet oasis (comparatively speaking) in a part of New Jersey characterized by farmlands, pinelands, shoreline, and the troubled Atlantic City, along tree-lined parkways, then speeding by over-crowded, over-built suburbia, passing wretched cityscapes and finally an industrial wasteland.

Two hours and fifteen minutes later I exited the bus in the bowels of New York City’s Port Authority Terminal, walked up a couple of flights of stairs – already faced with multitudes scurrying in all directions – and hit the streets of New York.

The heat of the summer sun and streaming folks struck forcefully. I stood still a moment – no longer, as the crush of movement from all directions shoved me around.

Throwing back my shoulders and attempting to summon my New York persona, I headed off, my destination a few short blocks away, a restaurant on 9th Avenue, dubbed Restaurant Row for the numerous eateries within walking distance of the theater district.

Walking the streets of New York is an exhilarating, energizing experience, activity everywhere. People outfitted in everything from expensive business suits to beach wear greet the eye, while ears are accosted by sirens, car horns, street vendors, children…and the smells, everything from cigarette smoke and vehicle fumes to incense and food-related aromas recognized and a few unfamiliar…city life unbounded.

Immediately upon arrival at the restaurant I proceeded to the ladies room.

One of the intricacies of maneuvering the city is locating clean restrooms. The condition of facilities in the Port Authority bus terminal, for instance, varies from barely usable to vomit inducing. I bypassed them.

I detoured into a Starbucks for coffee, another place with bathrooms (for customers only, of course). The place was packed, the wait to relieve oneself indeterminate. I continued on.

The restaurant, having opened only minutes earlier, offered a clean and well-appointed ladies room. What a relief… 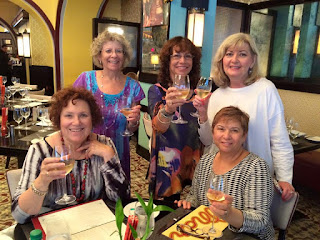 I settled into a comfortable seat at a round table for five, and a few minutes later four friends traveling from various corners of the metro area joined me for lunch and a Broadway show.

Savoring our wine, we relished our leisurely time together, enjoying an interest neglected during long working years when stealing away for a Wednesday matinee was an unrealistic indulgence.

Actually we had too much time to linger - enough for coffee and, dare I admit it - dessert.

The bill produced one of those suck-it-up-you-are-in-New-York moments. But it was worth it…

We strode through Times Square, a sea of humanity, on our way to the theater. Bits and pieces of assorted languages reached our ears. People gazed skyward, staring at huge electronic billboards, in particular one displaying the crowds crossing Broadway. People scrutinized the screen looking for themselves and friends, heedless of traffic, traffic signals, and the throngs surrounding them.

Individuals of all ages stopped to get their picture taken with Disney or Sesame Street characters. Others stared at maps, attempting to figure out in which direction to walk. It seemed everyone had a camera in hand, clicking away.

Summer in the city.

The show was, indeed, beautiful. The Carole King-inspired musical began with the fresh-faced 16-year-old’s desire to be a songwriter and closed with her award-winning album Tapestry 14 years later.

Everyone walked out of the theater with smiles, memories past and present, and familiar songs ringing in the ears.

Over a final drink we reviewed the show, finished catching up with family happenings, and parted reluctantly, already planning our next New York get-together.
Posted by Meryl Baer at 7/23/2015 09:48:00 PM