Sights, Sounds and Spirit of Seattle,

Driving into Seattle from the airport Friday night of Memorial Day weekend we experienced light traffic, but leaving town gridlock stretched for miles.
Seattle is our stomping ground for the week.
We strolled through Pike Place Market, a lengthy, meandering network of buildings with vendors selling fresh flowers and plants, seafood, meat, vegetables, gourmet food items, prepared foods, coffee (a Seattle specialty), and non-food products, including lots of T-shirts. A used book store beckoned, and I walked out with four paperbacks, reading material for the flight home. Now I am prepared for the trip plus delays. 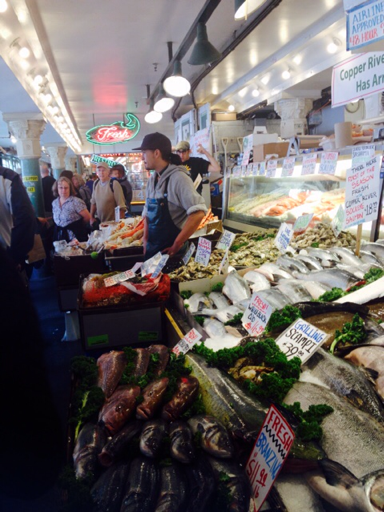 Seafood stand at Pike Place Market
We walked past the first Starbucks cafe, the line far out the door. It may be an iconic site, but we were not going to stand on a long line. Besides there are Starbucks all around the city.
An hour ferry ride offered a panoramic view of the Seattle skyline and surrounding islands. Our destination, Bremerton, featured the Kitsap Harbor Festival on the waterfront. The rest of the town was shut tight, except for the Horse and Cow Pub, Navy-themed in honor of the local Naval facility.
Mentioning to our waiter our disappointment in the town and the fact that we took the ferry, he answered, "Show your ferry ticket and you get 30% off your check." What a deal! We asked him what sites we should see before returning to the city. He thought a moment and said, "There aren't any. It's a pretty boring town."
But the ferry ride cost $4 (senior rate per person) round trip. Such a bargain!
There was one site to explore. An old destroyer, the USS Turner Joy DD 951 is now a museum. The Turner Joy earned much distinction during Viet Nam, providing shore bombardment and plane guard duty.  My ex-Navy destroyer man and I toured the ship, climbing up and down steep ladders and walking through narrow passageways. Not recommended for the claustrophobic. 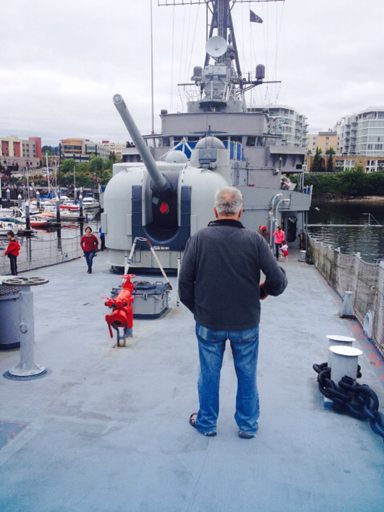 Hub on the deck of the USS Turner Joy
We rode the monorail to Seattle Center  site of the 1962 World's Fair, transformed into a park housing a science museum, theaters, the Chihuly Garden and Glass, Children's Museum, the Seattle Needle and other attractions. Including, this particular weekend, the Northwest Folklife Festival.
The attractions resulted in a mass of humanity. (Obviously everyone had not left the city Friday night.) Vendors selling food and a variety of products shared space with performers, some on temporary stages set up throughout the park and others performing on walkways. Everywhere individuals and groups serenaded the constant procession of humanity.
We toured the Chihuly Garden and Glass Museum  a permanent home for the famed artist's works, a local guy. Well, technically Tacoma, but close enough, and he went to school at the University of Washington in Seattle. The museum was crowded, but spacious enough to enjoy the exhibits. 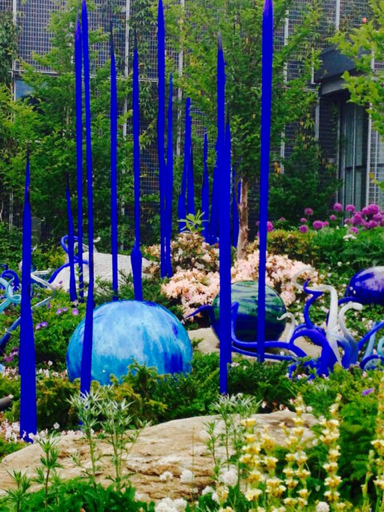 Chihuly gardens
Exiting hungry and thirsty, we left Seattle Center. Long lines encouraged us to seek less jam-packed eateries.
We found a pub in the Pioneer Square neighborhood, the oldest section of the city, specializing in oysters, a hub favorite. While savoring our meal a steady mass of people of all ages suddenly filled the street, most attired in green shirts, waving flags, singing and carrying on. Our waiter informed us this was soccer game night. Before every game a procession marches to the stadium in support of the Seattle Sounders. City spirit in action.
Previous visitors to the Emerald City suggested we take the Underground tour  and so we did. A G-rated and 21+ tour (dubbed the Underworld tour) are offered. We opted for the adult version, an hour evening tour of the underbelly, literally and figuratively, of early Seattle.
We learned tidbits of information the G-rated lecture omits, for instance...
The first skid row originated in Seattle.
Following a fire that destroyed the city in 1889, Seattle elevated itself several feet, solving problems of constantly flooding roadways and overflowing sewers. The original street level, now underground, became a haven for some legitimate and lots of illegitimate establishments from the 1890s through Prohibition, when the corridors channeled liquor to underground bars. 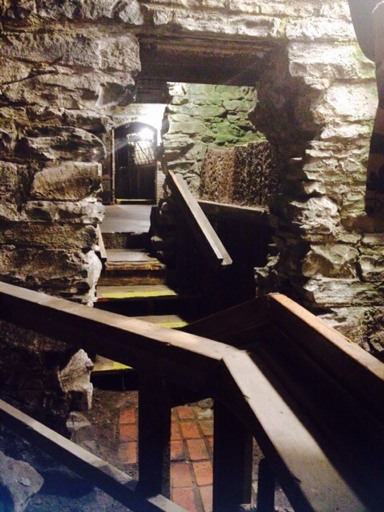 The passageways of underground Seattle
A couple of enterprising teenage entrepreneurs started the UPS company in 1907 delivering an assortment of drug supplies to the many, many, many women inhabiting boarding houses (of sorts) on the wrong side of town. I could not, however, verify the information. But it makes a great story...
Our bodies are holding up, but hint at their age. Sore legs, sore back, tired feet. Each night we return to our room exhausted, but ready the following morning to start over. There will be time to nurse travel wounds when home again.
Posted by Meryl Baer at 5/26/2015 09:15:00 PM