Trump May Attempt to Triumph Once Again

Donald Trump is a real-life character we love to watch, talk about, and relish hearing about, his escapades fodder for venues ranging from the staid Wall Street Journal to People magazine and late night talk shows.

Brazen, outspoken, a New Yorker born and bred, uber-wealthy, with serial wives, bad hair, a TV show, and real estate holdings around the country, the Trump name garners a wide variety of reactions. Some people envy him, others despise him, and quite a few believe he is more interested in self-aggrandizement and seeing his name and face in the news, on buildings, golf courses, and even stalls, than anything else.

Whatever Trump’s motives, the man makes a statement and demands attention.

Recently he swooped into the gambling mecca of Atlantic City, announcing the possibility that he could, if he decided to, save the city from a downward spiral into decay, obsolescence, poverty, and crime.

As the proud owner of three Atlantic City casinos, Trump’s name appeared large in lights on the marquee of three casinos – the Trump Plaza, the Trump Taj Mahal, and the Trump Marina, initially christened in typical Trump modesty Trump’s Castle – beginning in 1984. 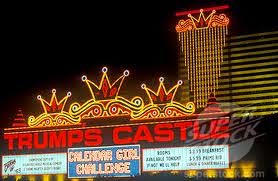 Landry’s purchased the Trump Marina in 2011 (now the Golden Nugget). The Trump Plaza closed in September 2014, a decaying shell of a once glitzy gambling hotel. The Trump Taj Mahal pursued bankruptcy one week later, threatening to close in November unless employees agree to salary concessions, the state offers tax relief, and Carl Icahn (owner of much of Taj’s debt) provides an infusion of cash.

The Donald asserts Trump Entertainment Resorts Inc. has not lived up to their management contract, allowing the hotels to decay. Although the company contains the Trump name, The Donald currently owns just 9% of the business.

The irony is current management is following in The Donald’s footsteps, raking in profits and neglecting to plough money back into the properties.

During Trump’s tenure as major shareholder of Trump Entertainment Resorts, the hotels underwent bankruptcies in 1991, 1992, 2004, and 2009, at which point Trump departed Atlantic City.

Following recent negative publicity concerning the closing of the remaining Trump-named properties, he demanded the Trump name be removed from the hotels.
A couple of days following the disheartening news of Taj’s impending doom, when all seemed hopeless, an object appeared in the sky above the sand and waters of Atlantic City, the machine’s loud motor and whirling rotors circling the city, focusing everyone’s eyes heavenward.

It was not a bird, nor a jet plane, but almost a Superman come to rescue the metropolis.

A helicopter hovered over the city, eventually alighting on the Taj roof. It belonged to a famous person, a celebrity and businessman well known in the Monopoly city. No one confirmed Trump himself deplaned, but the purpose of the ostentatious arrival of his aircraft seemed obvious.

The Donald now declares himself savior of the gambling city by the sea – should he choose to accept the assignment.

He may buy the two Trumps and resurrect them.

He wants to save Atlantic City, salvage jobs, and bring back visitors.