Unskilled in the Emoji Language

I am not proficient in languages. I began taking Spanish in seventh grade, eventually competent enough to read newspapers and a few books, but was not fluent with the spoken word. The best uttered was a kind of slow-spoken, chopped-up drawl, a grammatically poor equivalent of the real Spanish language.

I butchered the Russian language for a couple of years in high school, not getting much further than the equivalent of reading and translating board books.

I felt somewhat brainless visiting foreign countries over the years, unable to communicate with the locals, although places like Canada, England, Australia and the deep South of the USA pose no language barrier, although at times accents prove difficult to understand.

I discovered a new language I may have to learn, and am not excited about doing so. This language is becoming very popular. If family and friends begin using it, I may be forced to follow.

The new language is Emoji.

Emoji are pictures. String a row together, and users create messages, sentences, paragraphs, and stories - like pictographs found in caves, or hieroglyphics. To this history major it appears to be a deja-vu throwback – way back – to ancient times, but obviously I am missing something.

Emoji are new pictures. Initially used in Japan in the 1990s, Emoji crossed the Pacific and seriously invaded our shores after the turn of the 21st century.

Everyone, except maybe prisoners isolated in non-internet surroundings over the past couple of decades, are familiar with the concept of Emoji.

The esteemed and highly regarded Oxford English Dictionary added Emoji to its lexicon, defining the word as, “a small digital image or icon used to express an idea, emotion, etc., in electronic communications.”

I thought it would be cool to insert Emoji in this article, originally written in Word. I found a couple of cute Emoji (iemoji.com, getemoji.com and emojipedia.org), copied and attempted to paste them into the document. Only a question mark encased in a box appeared.

Further research indicated my Word was not up to receiving Emoji. But following additional Internet inquiry, I now have an Emoji keyboard on my iPhone (check this website to load on your iPhone) and a Character Palette app with Emoji on my Mac computer. (I impress myself with the lingo!)

Lucky for me, Emoji is not a spoken language.

My generation is at a distinct disadvantage when it comes to learning a new language. Experts tell us the best time to acquire new language skills are when young – very young – as an infant and toddler.

We are way, way beyond those years.

The language-skills part of my brain has lied dormant a long time and has probably begun to calcify, making the attempt to stuff new information into it difficult.

But if necessary I will try. And if failing, I will fall back on old language abilities, writing words, messages, sentences, paragraphs, and stories using the letters of the alphabet, forming words and recording them on paper or a computer or chiseling them into rock.

Examples of emoji in action (with translations)… 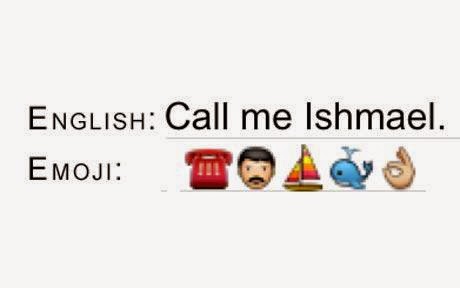 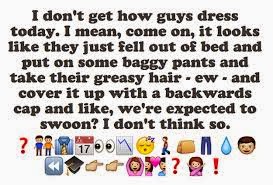 Email ThisBlogThis!Share to TwitterShare to FacebookShare to Pinterest
Labels: about emoji, emoji with translations