More Than a Taste of Mexican Culinary Fare 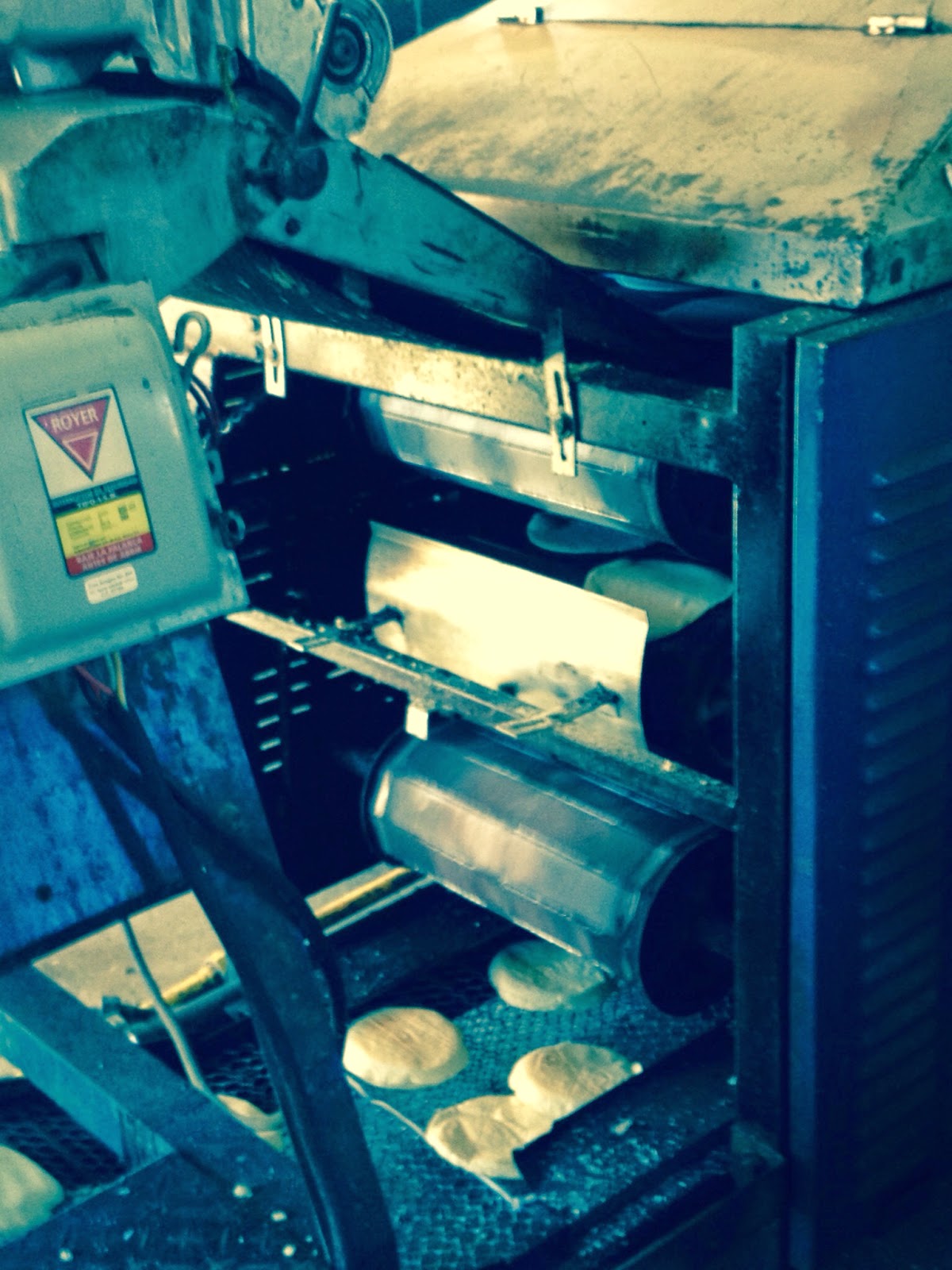 Tortillas rolling off the assembly line.
We did not set out to make this vacation a food extravaganza, but that is what it is turning out to be - an on-going Mexican culinary feast. Of course we are doing other things, like walking up and down hills, but daily activities are punctuated by food.

Friday we ventured into the countryside. The highlight of the tour was a stop at a tortilla factory. The large open-air room was scorchingly hot - it has been hot every day - but the workers seemed oblivious to the heat, carefully mixing dough, then placing huge mounds into the tortilla maker. Small round uncooked tortillas passed along a conveyor belt, entered the oven and less than a minute later, lightly browned and smelling wonderful, emerged ready to eat.

And they tasted delicious.

Piling back into the open-air truck, we drove on to a house in another small village where we observed Margarita, a very large woman, probably about 45 years old, making tortillas by hand. Working in an outdoor kitchen set up on a patio, open on three sides - the fourth side a wall of her home - with a thatched roof and surrounding trees protecting her from the sun and rain, she greeted us wile continuing to make tortillas, throw them on a cast iron pan set over a wood fire, expertly turn them over and finally removing fresh cooked, ready to eat tortillas. We filled them with a variety of salsas, sauces, and meat.

Lunch was yet to come. The mid-day meal is the main meal in these parts.

We continued on to a house on the beach. A hearty buffet awaited us.

Arranged on the grass, under coconut trees providing shade and a breeze, the buffet consisted of barbecued pidgeon (initially thought we were eating chicken), sausages (of indeterminate animal) and beef along with grilled vegetables (onions, peppers, zucchini), rice, beans, corn on the cob, potatoes, salad, and condiments including salsas and hot sauces.

The meal began with a lesson on the proper way to drink tequila - inhale deeply, drink all at once, exhale. We tried a couple of shots before passing the test and permitted to fill our plates.

Bowls of fresh cut fruit were placed on the picnic table following the meal.

And there was an open bar. For those who did not want to imbibe additional alcohol (remember the tequila shots) - after all, it was not 5 o'clock yet - there was soda, water, and juices.

The next morning hub and I enjoyed a Signature Taco and More walking tour of the Zona Romantica section of Puerto Vallarta. Beginning at 10:00 in the morning and over the next three hours we walked a mile and a half and stopped over a dozen times. Tacos are breakfast food for Mexicans, so it was not unusual to stand in line at taco stands mid-morning. Most stands were doing a brisk business.

We were instructed beforehand to come very hungry.

Our guide discussed the different kinds of tacos and the various ingredients and cooking methods for tacos, burritos, quesadillas, etc.

It was all rather confusing, except that some are made from corn and some from wheat.

We toured a tortilla and bread bakery, tasted fresh breads, and observed the preparation of pork rinds. This was one food I refused to sample. They are eaten like taco chips, with salsa and other dips and spreads.

Pork rinds are pig skins. We watched the pig skins - a.k.a. fat - frying in huge vats of oil. This, to me, was the least appetizing part of the tour.

By mid-afternoon we were hot, tired, and stuffed. I could not finish all the food, but gave it my best try.

I passed up a fruit popsicle for a very small cup of ice cream.

Next time I will hit the ice cream stand early.

Recent statistics - do not ask who compiles or analyzes them - indicate Mexico is now the fattest nation in the world. The U.S. dropped to #2.

I can understand why.

This morning we walked to the Mercado, the city market composed of lots of small stands selling meat, vegetables, fruit, fish, and a few non-food items. We bought vegetables and a fresh chicken for dinner.