Three kids and a dog vs. two grandparents. The saga continues…

Three long days of constant activity and you realize why parenting is an occupation for the young. Those of us in their sixties - plus or minus a few years - may be healthy and hearty, but not necessarily nimble and energetic enough to keep up with three kids aged three, six, and nine (and a dog) constantly on the go.

Saturday morning we went to the bagel shop for breakfast. Unlike meals enjoyed at a restaurant most of the time, Grandma did not have the luxury of sitting and relishing her meal. Breakfast was intermittently interrupted with the three-year-old’s repeated requests to go potty. She goes potty every time we go someplace new. It is imperative she try out the facilities, including the toilet, sink, soap dispenser, and towel mechanism. I am sure she will eventually outgrow this habit, but meantime how can you deny the kid a trip to the potty? You never know when she really has to go…

The six-year-old had a birthday party Saturday afternoon. Unfamiliar with the area, we trusted the GPS to direct us safely and timely to the party. We left early, or so we thought. We arrived ten minutes late, driving twenty miles to a place that turned out to be seven miles from the house. Thank you GPS.

We filled the van with gas. Large vans get lousy gas mileage. Gas costs a lot these days. 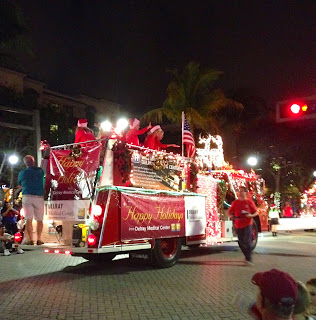 Saturday evening we had front curb seats for the Delray Beach Holiday Parade. There were marching bands - elementary schools, middle and high schools, public and private schools, lots of floats - even the local garbage truck was decked out for the holidays. The  procession lasted one entire hour. The kids loved it - you could tell because they sat quietly, mesmerized by the activity. 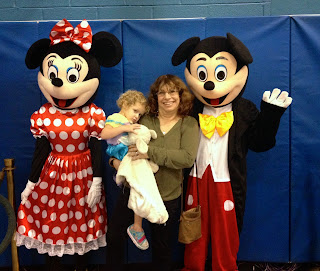 Grandma and the three-year-old went to a character breakfast at the local community center. We had our picture taken with Mickey and Minnie! We also met Spiderman, Cinderella, Dora the Explorer, and Spongebob Squarepants. There was so much to see and do there was no time to eat. Grandma begged for an opportunity to grab some food, but the request was denied. There was just too many fun things to do. 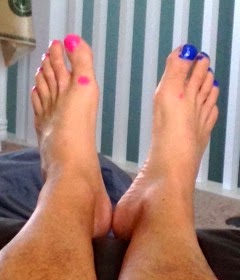 Sunday afternoon Grandpa, exhausted, took a nap on the couch. Grandma and the two girls were busy with manicures and pedicures. Poor Grandpa - the kids took the opportunity and gave Grandpa a pedicure. What pretty feet! The nail polish peels off, but no one told Grandpa that until later that night - after he had displayed his toes at the nine-year-old's basketball game. 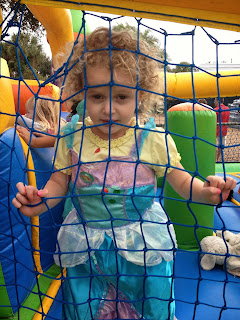 The kid is not in jail or a cage, although the thought occurred to me. She is having fun in a Bounce House.

And so the weekend ended Sunday evening with an exciting basketball game (our team lost 27-25 after being down 16-0 at one point) and ice cream sundaes. The kids put to bed, Grandma and Grandpa spent the rest of the night cleaning the house before Mom and Dad arrived home. There was laundry to collect and wash, lunches to pack, dishes to clean and put away, toys and papers and books to store. The dog was fed, we packed our bags, set the alarm for 6:00 a.m., and collapsed into bed.