It was cold yesterday, but not too cold to go outside and watch a highpoint of the weekend in our small, quiet, laid-back, off-season shore town - the annual holiday parade welcoming Santa Claus to town.
I was surprised Santa would bother coming to a backwater like ours this time of year – he is really, really busy. The only thing I can think of is that he is friends with our Governor, Chris Christie. I think they are Weight Watchers cronies. 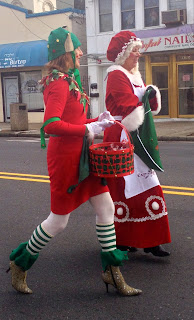 Our municipality is officially a city, but most people would not describe the place as a city, especially in the off season. It has few high rises and the only tax-paying businesses are retailers, mostly restaurants. But it does have a beach and boating. The place swells by thousands during the summer, then the population collapses as part-timers disappear following Labor Day.

Back to the parade.

It was a low-key, informal, amateur affair, but entertaining. No precision teams in this parade. Small groups walked or marched together, most groups not in step, not in straight lines, with participants wandering in and out of line as they strode to the sidelines greeting friends. Three fire engines led the parade, but halfway through they suddenly revved their engines, bells rang, and the trucks drove off on an emergency call.

Nothing was synchronized, but parade participants were having a good time.

The parade closed with Santa Claus arriving in – what else!? – a boat. Santa Claus brought us an early gift - snow. Not really, but it is quite a coincidence. It began snowing this morning, a few flurries at first, then a steady downfall. After an early morning trip to the gym it was a day to stay inside and cocoon. The exercise allowed hub and I to feel less guilty gorging indulging in substantial meals keeping us warm, busy, happy, and satiated.

The scene outside looks very pretty and peaceful this evening, but it is supposed to get warmer tonight and rain. By tomorrow morning the landscape will probably be a muddy, ugly mess.

Until the next snow.