Bright, warm sunny days highlighted an outstanding fall this year. The days grow shorter and the daytime warmth does not linger, but we savor each day before cold weather arrives.

The boardwalk is a wonderful place to walk and enjoy the weather while we can – flat, straight, the beach and Atlantic Ocean on one side, McMansions on the other side.

Yet all is not peaceful and quiet.

Heavy machinery seaside screeches while building dunes.  Pipes extend across miles of beach, moving sand from one section to another. Huge mounds of sand sit, waiting to be pushed into dunes and planted with grasses that help shield the landside from the worst of Mother Nature’s storms. And the dunes work, protecting many homes from destruction during last year’s Sandy storm.

The activity is not necessarily welcome, but we realize its positive impact in the short run. I am not a fan of fighting Mother Nature – she can be relentless and, in the long term, it is futile (and very costly) fighting her – but understand the dilemma facing governments following decades of building where we should never have built in the first place.

This weekend I spotted the following piece of equipment located every few blocks along the boardwalk. 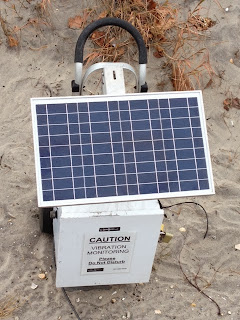 The solar-powered machines, called “SeismoBot,” monitor ground vibrations, air blasts, and water pressure changes. Apparently the sand dredging may unsettle the fragile earth beneath us. I am not sure what would happen if the monitors start beeping or a siren sounds signaling that something unusual is occurring, but I hope never to find out.

With any luck the machines only record good vibrations...
Researching the machines I discovered the company providing these machines was involved in the implosion of the Sands Hotel in neighboring Atlantic City a few years ago. The small hotel could not compete with larger competitors, declared bankruptcy and closed in 2006.

Pinnacle Entertainment, owner and developer of casinos throughout the country, bought the land, announcing a $1.5 billion resort would be constructed on the site.

At 9:37 p.m. on October 18, 2007, with much fanfare, the old hotel fell.  Accompanied by fireworks and parties on the boardwalk and beach (who said Atlantic City is only about gambling!) – the building collapsed.  Here is a video of the event:
The song in the video is “The End” by the Doors
“This is the end beautiful friend
This is the end…”

The economic downturn hit the casino industry hard, and in 2010 Pinnacle bowed out of Atlantic City, putting the land up for sale. The city built a park on the site and the land finally sold, but no announcement concerning specific plans for the location has been made.

Meanwhile, the vibrations that may or may not someday rock my town brought back memories of an old favorite song. Here is a video of the Beach Boys singing Good Vibrations. There is a cameo appearance by Paul McCartney, a birthday cake for Brian, and some awesome outfits.
“I’m pickin up good vibrations…
Good, good, good, good vibrations…”
Posted by Meryl Baer at 11/19/2013 06:00:00 AM