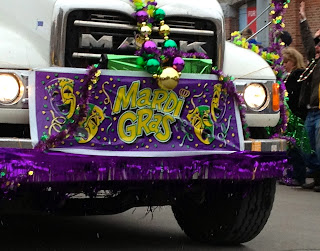 I have yet to make it to Rio de Janeiro or New Orleans for Mardi Gras, but this past weekend celebrated the event in Burlington, Vermont. Burlington's bash is not listed in the top ten world-wide Mardi Gras celebrations (according to wiki), but it is a lot of fun. This was the 18th year for Burlington's parade, an effort which began and continues to be a local charity fundraiser.

The parade was Saturday afternoon. There were few skimpy costumes, and those that appeared skimpy were worn over nude-colored long underwear. It was cold. The sun was not shining, and the sky turned grayer as the afternoon progressed. But the thousands of celebrators - estimated at 25,000 - lining the parade route dressed warmly, outfits consisting of long underwear, sweaters, jeans, warm shoes or boots, coats, hats and gloves. Mardi Gras Northern Style.

There were no marching bands or twirlers, but lots of floats made with humor, dedication, creativity and minimal money. Floaters threw bead necklaces and candy as their floats slowly passed the crowds. My 19-month-old granddaughter stood and stared throughout the parade, not quite sure what to make of the shouting, hooting, frolicking crowd.

Here are a few pictures of the festivities: 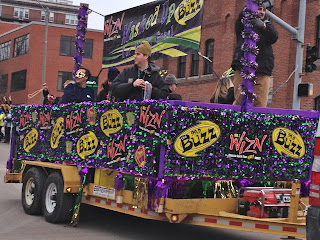 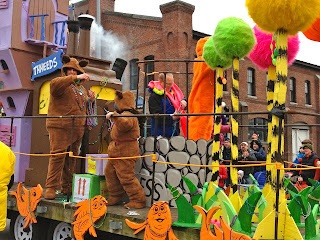 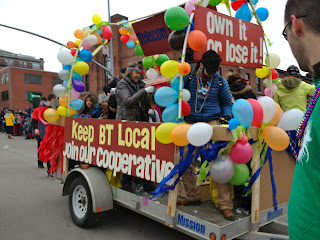 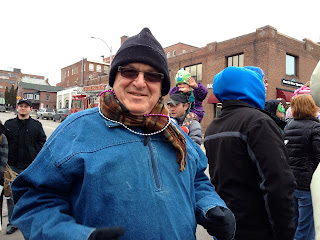 One of the revelers with his necklaces (a.k.a. hub) 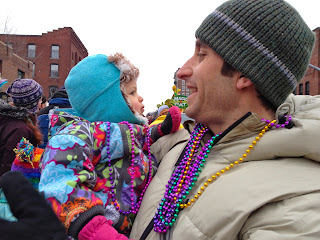 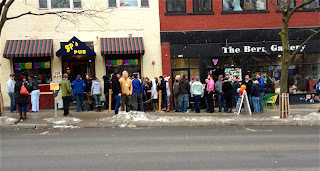 The real party begins after the parade.Thirsty members of the crowd
line up waiting to get into their favorite drinking place. And in Burlington
(a college town, home to the University of Vermont) there are a lot of
bars (coffee shops too).

Our small contingent made their way home to enjoy cups of hot coffee and tea.
The G-rated version of Mardi Gras Northern Style.