One hundred forty years ago today Susan B. Anthony exercised what we all take for granted: the right to vote. Except at the time it was illegal for women to vote anywhere in the country.
Anthony and 15 other women registered to vote in Rochester, New York, and on November 5, 1872, cast their votes in the national election. They all were arrested. 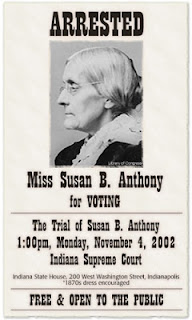 Anthony voted for the Republican candidate – Ulysses S. Grant was running for a second term  - because Republicans promised to listen to the rising demand for women’s rights. (How times have changed…)

Anthony was the only one of the 16 to go on trial. The U.S. Attorney General, Richard Crowley, charged Anthony with violating the 14th Amendment to the Constitution, which guaranteed, “the right to vote…to any of the male inhabitants 21 or older.” The intent of the amendment, adopted in 1868, was to guarantee blacks the right to vote.

Anthony was angered by the insertion of the word ‘male’ in the amendment, the only use of the word in the Constitution. The judge, known to be against women’s suffrage, refused to allow Anthony to take the stand in her own defense. He ordered the jury to find Anthony guilty. She was fined $100 for displaying contempt of the law. Anthony vowed not to pay one penny.

The trial was a sham, but turned out to be a turning point in the women’s suffrage movement. It began a subtle shift of the fight for women’s suffrage from a fringe movement of what many considered a group of eccentric women to an honorable struggle for every citizen’s right to vote.

Anthony did not live to see the passage of women’s suffrage. She died in 1906. Women’s suffrage became the law of the land in 1920 – one hundred years after she was born.

Don’t let her life-long fight and that of so many others be in vain.