We are back home once again, three weeks after beginning our journey halfway around the world. We had a wonderful time; the trip was truly a 40th wedding anniversary gift to each other that we will cherish. Of course there are bills to be paid, laundry to do, bills to pay, mail, blogs and friends to catch up with, bills to pay...

Here are a few pictures of our vacation, sort of a final farewell to the Land of Oz. 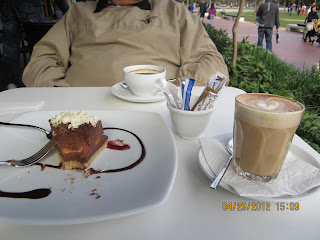 This is a picture of one of our sinful afternoon refreshments at a chocolate cafe in Sydney. Hub's coffee, my latte (always served in a glass), and our shared chocolate cheesecake (which I imported into the states as another lump on my hips). The Aussies are big on food presentation, and whether the simplest meal in a small cafe to fancier digs, food is served carefully, with extra touches, on china dishes. 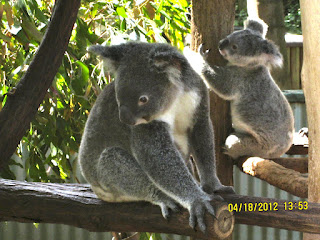 Koalas - which are not bears, as I learned - are synonymous with Australia, as are other marsupials like kangaroos and wallabies. Since Australia was isolated for millenia from other parts of the world, the continent developed distinctive flora and fauna. The country has the most venomous snakes in the world, more varieties of reptiles than anywhere else, the platypus (much smaller than I imagined), and hundreds (over 700) of different kinds of eucalyptus trees (silly me, I thought a eucalyptus tree was one kind of tree.). Most eucalyptus are native to Australia; there are some on the neighboring islands of Indonesia and New Guinea. 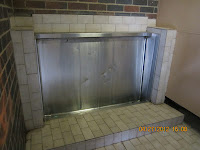 There was a picture of the beautiful ladies' room at the Sydney Opera House in an earlier post. Not to be sexist, the above picture is a typical public toilet urinal. The trough at the bottom slopes down for easy draining. One of the pleasant things about Australia is that it is a modern, clean country, and that includes public toilets (rest rooms). 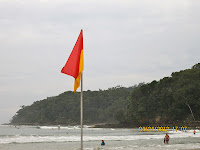 Surfing, swimming, spending time on the beach are national pastimes. But the waters can be treacherous and change constantly. It is imperative swimmers remain between posted flags, and it is common for lifeguards to change the swimming areas several times during the day, as tides, currents and shark-sightings change constantly. Helicopters fly low over the water looking for sharks and notify the lifeguards when necessary. 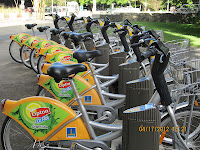 Australians enjoy an outdoor lifestyle dictated by a subtropical climate throughout much of the country. Stores and cafes often open to the street, with large outdoor sitting areas. Many cities mandate a certain percentage of open space for parks, walking and cycling paths. Brisbane offers bikes for hire throughout the city; hop on one near your home, ride downtown or to work or meet a friend for shopping and lunch, park the bike in one of the above holding areas, and take another bike for the ride back home. 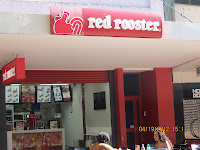 Australia has its own fast food chains, such as the Red Rooster pictured above, but a lot of American outlets have made inroads in the country. McDonalds/McCafes seem to be everywhere. I am not a fan, but there is something to be said for their availability, rest rooms and free wifi. And the McCafes have real espresso machines and bakery offerings found in a real bakery - not the faux-food sold in U.S. stores.

Australia is planning a major expansion of its wifi system; it is now frustratingly slow in many areas and difficult if not impossible to upgrade. Wifi available in many public areas is often expensive and slow. 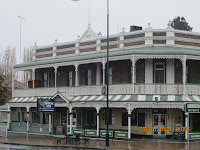 Driving through small towns in the countryside - the hinterlands and the bush - you start to feel as if you are in a time warp. Most of the buildings in town centres were built around 1900 in what looks like an American Western-Victorian architectural style and have not been upgraded since. The towns all have an old hotel similar to the one pictured above with a pub, restaurant and hotel rooms. 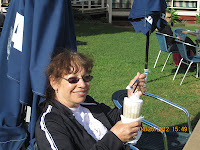 I could go on and on...but all good things must come to an end.
Although I am looking forward to home-made Australian-style iced coffee this summer (coffee served over a scoop or two of ice cream, topped with whipped cream and chocolate shavings).
Posted by Meryl Baer at 5/03/2012 04:17:00 PM