The internet is a wonderful invention, but does not always work seamlessly. We have been having problems Down Under with a slow connection at the house where we are staying. The wireless at cafes also does not always work well. I am trying to post when possible. Thank you for your patience!

Food is a favorite topic, and we have successfully eaten our way from Sidney north to Brisbane and along the Gold Coast. Here are a few pictures from our culinary experiences. 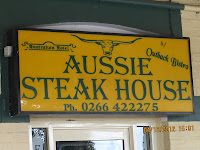 Lunch on the road at the Aussie (pronounce Auzzee - that's where they get the Oz in Land of Oz as a nickname for Australia) Steak House. The restaurant/pub is in a hotel dating back to the 1800s.

Australians are meat eaters. There is a lot of lamb on menus, as well as beef and pork. Bacon seems to be in everything, but it is not the thin slices familiar to Americans. Aussies cook up large slabs of bacon and cut them into smaller pieces for dishes such as omelettes, salads and quiche, or eat the slices as part of a typical brekky (breakfast) - eggs, ham or sausage, potatoes, tomatoes (halved and baked) or mushrooms, toast (usually white bread), and slices of avocado.

Kangaroos and other native wildlife are also consumed, although the animals are not as popular as cattle/beef, sheep/lamb and pig/pork. We tried roo burgers one night. I did not like them - tasted too gamey, well done and tough - but hub ate them.

I am sure you have spent time pondering the age-old question - how did the kangaroo get its name? The story goes an enterprising Englishman was attempting to communicate with the natives. The Englishman pointed to a kangaroo and asked what it was. The aborigine answered, "kangaroo," which means something like: I have no idea what  you are talking about. 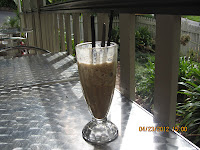 Who would think this cool looking drink was an iced coffee? Little did I know when I first ordered an iced coffee I would become addicted Oz-style. The Oz version consists of a tall glass with a large scoop of ice cream, espresso coffee, and ice cubes made of coffee - that way the drink does not get diluted as the ice cubes melt. The Aussies really love their coffee, and iced coffee a la Oz is a winner! 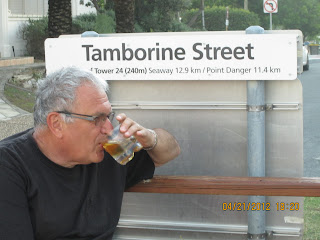 We spent the weekend with my cousins who live in a subtropical beach mecca along what is known as the Gold Coast of Australia. My cousin went to Australia when she graduated from college decades ago, obtaining a two year teaching job. She met her soulmate, married, and as they say - the rest is history. They lived in Australia almost two decades, moved back to the states for another 15 years, and two years ago the entire family returned to Australia.

There is nothing more appropriate to subtropical beach living than the 5:00 p.m. drink on the beach. Hub enjoys his beer here. 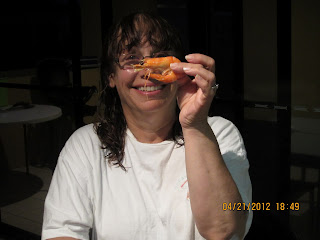 Prawns - otherwise known as shrimp to most Americans - are available in several sizes and varieties. They are always sold head intact, whether raw or cooked. Here I am holding a large cooked shrimp pre-beheading. Removing the head requires a quick snap, otherwise gooey stuff has to be extracted before eating.

I have to give up now.
It has taken 45 minutes to download the pictures above.

I have been writing more about our Australian Adventure for seniorreport.com website. Check out our latest adventures here.