Brouhaha Over My Uterus

It is a sign of the times that the political debates of the Presidential season changed over the past couple of weeks. They have veered from - the sky is falling and Obama is leading the country to economic ruin - to social issues, represented most recently by the brouhaha over my uterus. That is because the sky is NOT falling and the economy is getting better, which even the Republicans must concede. If the economy is not good political fodder, social issues always are.

The brouhaha is not really over my uterus. I cannot have any more babies. At my age it would be a miracle (unless in vitro fertilization is considered and we are not never going there). But there are millions of young women who are or will be impacted by the debate over birth control and abortion.

I get so tired of reading and hearing from politicians, the vast majority of them men, lecturing women about what they should or should not be doing to their bodies.

It is nobody’s business what I do with my body. If I want to regularly overeat and indulge in a Paula Deen-like burger between a doughnut that might eventually lead to astronomical medical expenses and an early death, well, politicians are not ranting about sewing up my stomach.

Republican Presidential contenders are not discoursing about health care for the kids they want born, or pre-school programs for them, or adequate, affordable housing, or job training for their parent(s), or a quality education so the kids can get jobs two decades after birth.

I find this so infuriating, frustrating and sad because the debate and the controversy have been going on for well over a century.

Ninety-six years ago – on February 11, 1916 – Emma Goldman was arrested for preaching birth control. 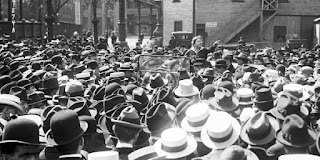 Goldman worked as a nurse and midwife on the lower East Side of New York City in the 1890s, a neighborhood overflowing with European immigrants. She realized the need for contraceptives and began speaking out for birth control, attacking Comstock, an 1873 federal law outlawing the distribution of birth control devices and literature.

Anthony Comstock is probably considered a hero by the anti-birth control, anti-abortion crowd – if they ever heard of him. Comstock, a country boy, landed in New York City and was outraged by the decadence. He worked hard to have the sex trade business shut down and eliminate prostitution. Shocked by printed birth control advertisements, he linked the issues, believing the availability of birth control led to the illicit sex trade and prostitution.

Comstock lobbied Washington for an anti-obscenity, anti-birth control bill. Congress passed the law in 1873, making it a federal crime to distribute contraceptives or abortion information by mail or across state lines. The statute was also responsible for obscenity and pornography rules leading to book banning, restrictions on art and literature, and a ban on sending pornography through the mail.

Comstock applied to intrastate commerce. Several states followed with their own laws. Connecticut passed the most restrictive legislation, declaring the use of birth control a crime. Married couples could receive a one-year prison sentence if convicted.

Emma Goldman was not the only one speaking out against Comstock. Birth control crusader Margaret Sanger openly challenged the law and fled to Europe for a year to avoid prosecution. 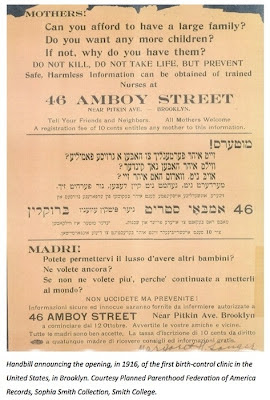 Announcement of the opening of Sanger's Brooklyn birth control clinic

Sanger pioneered research in oral contraceptives, opened the first birth control clinic in Brooklyn, New York, in 1916, and gained a minor victory in 1918 when the courts allowed women to use contraceptives for therapeutic reasons.

Challenges to Comstock continued. The U.S. Supreme Court upheld the law in a 1936 case, but permitted doctors to distribute contraceptives across state lines.

The first oral contraceptive pill manufactured and available to the public was produced by G. D. Searle and Company in 1960. The Supreme Court declared the ban on contraceptive advertising unconstitutional in 1983.

Comstock is still officially on the books. The law is often cited in obscenity and pornography cases. But I digress…

I want to thank Emma Goldman and the other brave souls who stood up to the arrogant and intolerant ones intent on controlling women, so that women could live better lives today.

Researching this article I came across some interesting information about birth control methods throughout history, some simply folklore, some that work, and some simply ludicrous. I’ll share them with readers in a future post. Stay tuned!