I was not sure how to title this post; my title really does not speak to the topic very well. I discovered an interesting piece of trivia that probably falls into the category, “We’ve come a long way, baby,” but not really. Although it does not have anything to do with the history of women in the United States, it says a lot about the morals of the 1890's era in the U.S. and how customs and behaviors were changing.
The event: The November 1896 issue of National Geographic Magazine included a photograph of a woman with bared breasts. This was the first picture of a woman's breasts to appear in a major publication. It was not a picture of an American or a white woman. It was a black African woman.
The Victorian sentiment of the era implied that obviously revealing (public) pictures of men or women were quite unacceptable. The photo caused a stir and was pretty sensational at the time. The magazine’s black and white picture of a Zulu bride and groom from South Africa was a milestone (colored pictures did not appear in the magazine until the early 20th century). Pictures of indigenous people untouched – showing their native dress (or lack thereof) – became the acceptable norm.
Here is the famous photograph: 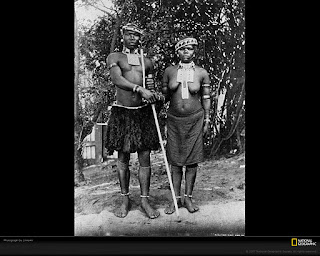 An updated piece of information about the same subject matter: A recent research study (released in 2011) conducted in Germany 'discovered' that men who stare at women's breasts regularly have, "lower blood pressure, a lower resting heart rate and fewer cardiovascular incidences". The activity can prolong a man's life by as much as five years. All it takes is about 10 minutes a day of boob-staring activity.
So, readers, how many women out there are going to start their guys on a regular exercise regimen?
Posted by Meryl Baer at 11/01/2011 03:37:00 PM