We were in Burlington VT this past weekend to see my son, his wife and new baby. My son is an amateur athlete. He was a competitive cyclist through high school, college and beyond, and then got into running. Lately he has participated in triathlons. He qualified for the amateur Triathlon Championship this year, which happened to be in Burlington this past weekend. 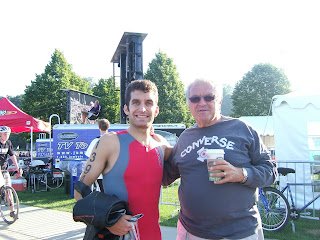 Triathlete on left; fan (aka Dad) on right﻿.
The triathlon consisted of a  1.5k (.9 mile) swim in Lake Champlain, a 40k bike loop (24 miles) and a 10k (6 mile) run. It was a beautiful day as probably thousands of observers lined the route. We found a prime spot in Waterfront Park, watching the athletes complete their swim and run toward the transition area, peeling off wetsuits and grabbing their bikes.
Groups were divided by age and gender. I walked close to the transition area in an attempt to catch my son leaving the swim and running towards his bike. What amazed me was the older women athletes; women in their 60s and 70s and some competitors in their 80s.
How can they do that? The constant training and exercise boggles my mind. I cannot imagine older men and women pushing themselves and competing in these punishing races. What drives them? I imagine they are in great shape, but…
Older women athletes are becoming more common and participate in a variety of sports. Diana Nyad, 61 and previously a world-class long distance swimmer, attempted to swim 103 miles from Cuba to Florida in early August. A combination of weather and physical problems forced her to quit halfway through, but the fact that she had the physical fortitude, endurance and discipline to try amazes me.
A nun and triathlete, Sister Madonna Buder, currently in her 80s and still competing, began running in 1978 and has not stopped. She has competed in the Hawaii Ironman Triathlon several times and was the first woman competitor in the 75-79 age group.
Then there is 91-year-old Canadian Olga Kotelko, world record holder in several outdoor track categories. She and hundreds of other older competitors descended on Finland in 2010 for the world outdoor masters track championships. Currently a group of doctors and sports training professionals are studying her to find out the secret to long-term good health and physical fitness.
Studies indicate that we – men and women – begin losing our lung capacity in our 40s and muscle tone in our 50s. A slow physical descent occurs until approximately age 75. Then the descent usually becomes a precipitous slide downhill. Professionals are trying to figure out why, studying athletes like Olga Kotelko, who seems to have bucked the trend, seeking the secret to physically fit longevity.
I am sitting on a comfortable couch, computer on my lap, coffee drink on the table, finishing my bagel, reading and writing about physical activity. I did attend Zumba class this morning, but it pales compared to the athletic prowess and feats of others my age and a lot older.
And so I marvel at the accomplishments of others, and realize I doubt I can do it myself. My hub and I look at each other when watching my son compete – where did he get those genes, that motivation and discipline?
Not from us.
My older son in second grade had to write an autobiography. He described himself as follows:
“I am tall and thin, unlike both my parents.”
That about sums it up - physical description and lifestyle.
For the record, my son finished 21st in his age category (30-34), an awesome achievement!
﻿
Posted by Meryl Baer at 8/23/2011 02:53:00 PM